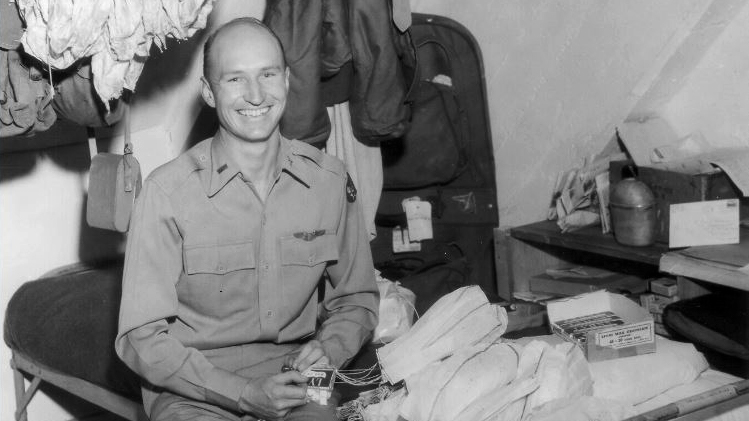 On October 10, 2020, the famous and beloved Berlin Candy Bomber will be turning 100! An impressive milestone for an inspiring hero that deserves an extra special birthday celebration. Instead of his usual public appearances, this year, Colonel Halvorsen will be having a private gathering surrounded by his family. This change is why the German International School of Silicon Valley (GISSV) and the Halvorsen family chose to collaborate on digital and creative ways to wish Colonel Halvorsen a very Happy 100th Birthday.

During the time of the Soviet blockade in 1948, Halvorsen served as a C-54 pilot in the Berlin Airlift (Operation Vittles), helping to supply food and essentials to Berliners behind the lines. Halvorsen witnessed the challenging conditions the children were facing and launched his own mission deemed "Operation Little Vittles," dropping an estimated 23 tons of candy via 250,000 parachutes. This act of kindness boosted the morale of those in blockaded Berlin and galvanized many in the United States to help with his mission. Colonel Halvorsen's lifetime mission to promote "Freedom instead of Walls" and an everlasting German-American friendship continues to inspire all of us today. Perfectly captured in his recent [video message] to Michael Müller, Governing Mayor of Berlin in April 2020.

How Can You Help? Send us a short birthday video message for Colonel Halvorsen! We will collect all the birthday wishes and create a special video to be presented to the birthday boy himself!

Thank you to San Francisco German General Consul Südbeck for helping us launch this project with your [birthday greetings video]! Given this is such a special milestone and October is German Reunification month, we will continue the celebration and collect video greetings through October 31, 2020. (Videos should be in landscape format and preferably under 2 minutes.)

To submit a Birthday Greeting follow this link -> https://forms.gle/YoEjMMdq2ydauMqt5