Virtual Screening of "The Black Museum" 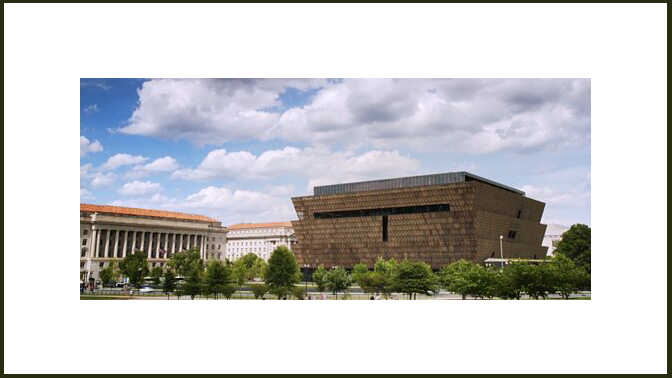 Shaping the Past: How do we interpret the past on screen? In the framework of STP-on-Demand, the Goethe Pop Ups Kansas City and Houston present Oliver Hardt's documentary The Black Museum (2018).

The design of the National Museum of African American History and Culture by Ghanaian-British architect David Adjaye is documented in The Black Museum by German filmmaker Oliver Hardt. Within the spaces of a museum that explores US history and culture through the lens of the African American experience, this multi-perspective documentary gives a platform to Black diasporic voices. Together with his earlier documentary, Black Deutschland, Hardt’s The Black Museum was selected by Goethe Pop Up Kansas City and Goethe Pop Up Houston as a reminder of storytelling and creative expression’s ability to challenge the dominant discourse, a theme recurring in works by Shaping the Past fellows Alisha B. Wormsley and Patrick Weems, who are both part of the Goethe Pop Up’s programming this fall.

For a hundred years it was demanded, dismissed, and postponed. But never conceded. Since September 2016, it stands like a bronze beacon in the middle of Washington, D.C. — the National Museum of African American History and Culture (NMAAHC). Through 100,000 square feet of exhibition space spread across eight levels, the museum explores America’s history through the lens of the African American experience. In its first year, the museum attracted more than 3 million visitors. The success of the project serves as a reminder that design and advanced storytelling can challenge the dominant political discourse and enable a diverse conversation. The Black Museum takes the audience on a journey through the building and the exhibitions — from the dark and low-ceilinged basement where everything starts with the history of slavery and freedom, segregation and the Civil Rights movement, to the upper, light-flooded galleries dedicated to African American music, visual arts, and contemporary culture.

Oliver Hardt is a director and filmmaker based in Frankfurt am Main. His multidisciplinary practice ranges from writing, producing, and directing award-winning documentaries and high-end corporate films as well as creating large-scale video installations for exhibitions and live-shows. In his documentaries, Hardt frequently addresses Black history and culture with a strong emphasis on architecture, design and contemporary art. His work has been featured at international film festivals. As a lecturer on film and time-based media, Hardt has held seminars and been a guest lecturer at the Academy of Visual Arts in Frankfurt, the Bauhaus University in Weimar, and the Zurich University of the Arts, among others.

In 2021, he will be artist-in-residence at Vila Sul/Goethe Institute in Salvador da Bahia, Brazil.