Virtual Screening of "The Untold Story of Emmett Louis Till" 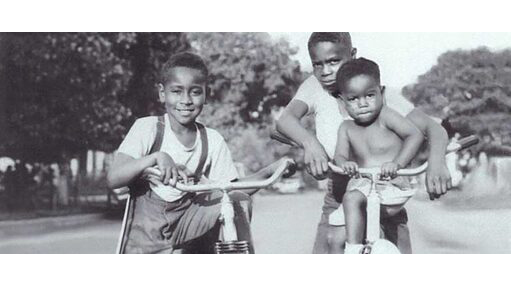 STP-on-Demand: Keith A. Beauchamp "The Untold Story of Emmett Louis Till"

Shaping the Past: How do we interpret the past on screen?

In the framework of STP-on-Demand the Goethe Pop Up Kansas City presents Keith Beauchamp’s documentary The Untold Story of Emmett Louis Till (2005).

This film was selected by the Goethe Pop Up Kansas City in preparation for the virtual panel discussion “Approaching Reconciliation, or the Discomfort of Remembrance” on December 1, 2020, which will touch on two places of remembrance for victims of lynching – Emmett Till in the Mississippi Delta and Levi Harrington in Kansas City, MO.

How do past acts of racial terror and their memorialization in the present shape our society as a whole? The film The Untold Story of Emmett Louis Till gives attendees an opportunity to better understand the life of Emmett Till, his horrific death, and how his legacy shapes the present before joining us for our panel discussion. This online conversation will feature Patrick Weems, Shaping the Past fellow and Executive Director of the Emmett Till Interpretive Center, Glenn North, Co-Liaison of the Community Remembrance Project Missouri in Kansas City, and Susan Neiman, American philosopher and director of the Einstein Forum in Potsdam, Germany. The conversation will be moderated by Dave Tell, Co-Director of the Institute for Digital Research in the Humanities (University of Kansas) and author of Remembering Emmett Till (2019).

The Untold Story of Emmett Louis Till

Emmett Louis Till was born in 1941 and was brutally killed in 1955. He was only 14 years old. The African American kid was murdered in Mississippi after he was accused of whistling at a white woman in her family's store. The murder was brutal. He was attacked and killed by a few white men. What made it even worse was the fact that they were acquitted. This unfair behavior from the court drew plenty of negative attention. Moreover, it underlined the necessity of stopping the persecution of African Americans. At that time, the USA was extremely racist. Emmett Till became an icon and turned out to represent the fight for the Civil Rights Movement, even after he was dead.

While his story was often illustrated in culture through books, music or documentaries, nothing compares to Keith Beauchamp's version. Keith Beauchamp took his time to create an interesting documentary. While Emmett Till's story was known all over the world, Beauchamp took this whole venture to a new level. He managed to get in touch with relatives or witnesses and he obtained testimony that was never seen before. The film was created as a documentary and aims to underline the savage profile of the USA in terms of mentality back then.

Keith Beauchamp attended Southern University in Baton Rouge, Louisiana, where he studied criminal justice. In 1999, Beauchamp founded Till Freedom Come Productions, a company devoted to socially significant projects that can both teach and entertain. He has devoted the past twenty-two years of his life telling the story of Emmett Till and has traveled extensively between New York, Chicago, and Mississippi to investigate the historic murder. During his travels, he became friends with Mamie Till Mobley, the mother of Emmett Till.

Beauchamp is currently the executive producer and host of Investigation Discovery’s crime reality series, The Injustice Files and the producer of the upcoming feature film Till. He is also a frequent lecturer at colleges and universities around the country.