Six Months Into the Biden Presidency: 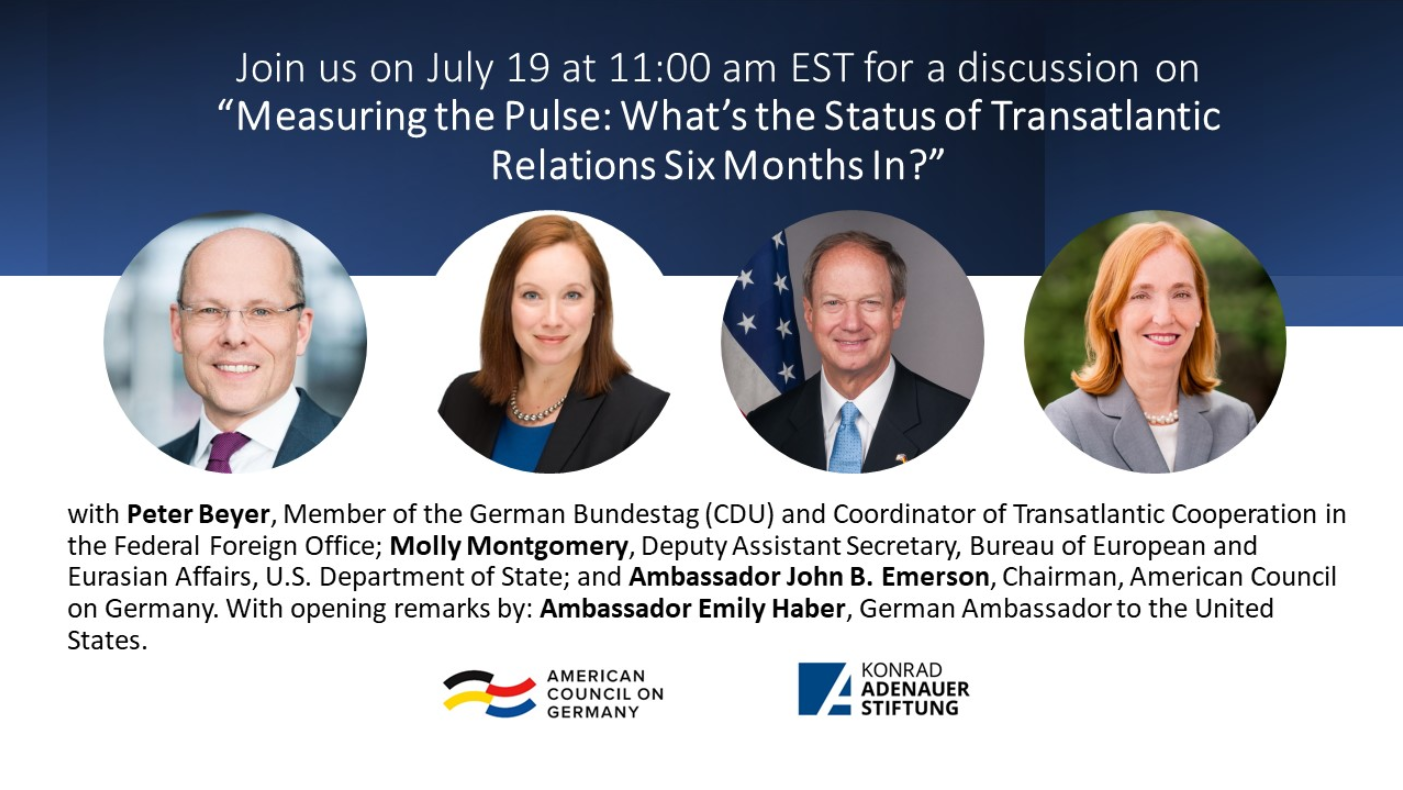 Six Months Into the Biden Presidency: Transatlantic Trends and Aspirations

With the election of Joe Biden, there is a strong desire on both sides of the Atlantic to repair and revitalize transatlantic relations. In light of the recent G7, NATO, and U.S.-EU summits, leaders on both sides of the Atlantic recognize that the combined power and influence of the European Union and the United States is indispensable for global cooperation on a range of issues including defense and security, climate change, trade and investment, health, digitalization, and confronting the rising power of China

To mark the first six months of the Biden administration, the American Council on Germany (ACG) and the Konrad-Adenauer-Stiftung USA will hold a series of five virtual events immediately following the visit to Washington by German Chancellor Angela Merkel. Taken together, these events will focus on the direction of the new U.S. administration in key areas such as climate policy, international security, and post-COVID economic recovery, in an effort to highlight how Europe and the United States can better collaborate on these issues.

JULY 19 AT 11:00 AM EST: MEASURING THE PULSE: WHAT’S THE STATUS OF TRANSATLANTIC RELATIONS SIX MONTHS IN?

Within hours of taking office, President Biden brought the United States back to the Paris Climate Agreement. The new administration has also taken steps to return to the Iran nuclear deal, de-escalate transatlantic trade tensions, and committed more U.S. troops in Germany. Nevertheless, there are contentious issues where Europe and the United States do not see eye to eye. Join us for a discussion about the areas of collaboration – and also the sticking points – between Washington and Europe six months in to the new administration.

Followed by a discussion with:
Peter Beyer, Member of the German Bundestag (CDU) and Coordinator of Transatlantic Cooperation in the Federal Foreign Office
Molly Montgomery, Deputy Assistant Secretary, Bureau of European and Eurasian Affairs, U.S. Department of State

Geopolitical challenges continue to confront the transatlantic alliance ranging from Russia’s continued aggression in Ukraine to China’s military build-up and pressure on Taiwan to President Biden’s decision to remove American troops from Afghanistan by September of this year to cyber threats from adversaries around the world. How can Europe and the United States get on the same page to effectively deal with these issues? What will “burden-sharing” look like in the months and years ahead?

JULY 20 AT 1:00 PM EST: CLIMATE CHANGE POLICY: CAN THE UNITED STATES BE A CREDIBLE LEADER?

A number of recent surveys in Europe and the United States have shown growing discontent with the way democracy is working, distrust in democratic institutions, and the ability of democracies to confront the many complex challenges facing our societies. What can be done to rebuild confidence and to increase citizen engagement to improve the effectiveness of our democracies?

JULY 21 AT 10:00 AM EST: POST-COVID ECONOMIC RECOVERY: IS INFRASTRUCTURE THE ANSWER?

President Biden has proposed a $2 trillion infrastructure plan that he states will upgrade roads, bridges, and water systems, expand digital access and broadband, hasten a shift to clean energy, and create millions of jobs. The EU’s $800 billion Recovery Fund also focuses on addressing climate change and the digital transformation as part of its economic recovery plan. What impact will these efforts have on the recovery and are there opportunities for transatlantic cooperation?

The transatlantic economy remains the most important in the world comprising one-third of the world’s GDP, $6.2 trillion in commercial sales, 61 percent of inward FDI and 64 percent of outward FDI, as well as 27 percent of global exports and 32 percent of world imports. Currently, the U.S. economy is running on all cylinders with a forecast of 6-7 percent real GDP growth this year, while the Eurozone is still suffering. Greater cooperation could help the transatlantic community together recover better and faster.