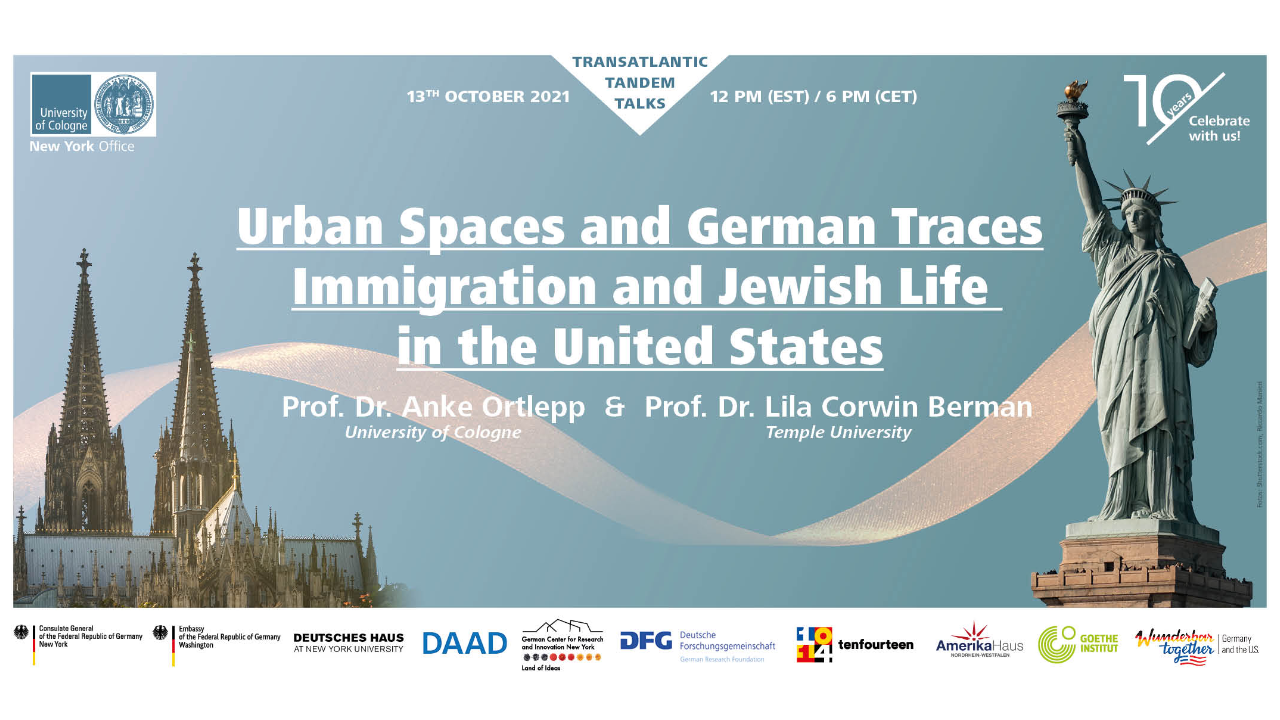 For centuries now, immigrants have come to the United States to start a new life. In this virtual Transatlantic Tandem Talk, Prof. Dr. Anke Ortlepp, Professor of North American History at the University of Cologne, and Prof. Lila Corwin Berman, Professor of History at Temple University, will discuss what this means for these individuals’ respective culture and language, where immigrant groups settled, and how they maintained their identity through institutions and philanthropy. Is there still German life in New York City - and what does Jewish urban history look like?

Prof. Dr. Anke Ortlepp is a Professor of North American History at the University of Cologne and the co-director of the university’s North American Studies Program. Her research focuses on American cultural history, more specifically the history of air travel, the history of race relations and the history of 20th century architecture. As a former Research Fellow and Acting Director of the German Historical Institute, Washington, D.C., she has also explored the history of German migration to the U.S. from an intersectional perspective. Her publications include Auf denn, Ihr Schwestern!: Deutschamerikanische Frauenvereine in Milwaukee, 1844-1944 (2004) and Jim Crow Terminals: The Desegregation of American Airports (2017).

This event is part of the Transatlantic Tandem Talks series: The Transatlantic Tandem Talks are hosted on the occasion of the 10th anniversary of the North America office of the University of Cologne in New York in the year 2021 in cooperation with its partners the Consulate General of the Federal Republic of Germany in New York, the German Embassy in Washington D.C., Deutsches Haus at NYU, DAAD New York, the German Research Foundation (DFG) North America, the German Center for Research and Innovation (DWIH) New York, 1014 Space for Ideas, the Goethe Institute New York, AmerikaHaus NRW e. V., and Wunderbar Together.