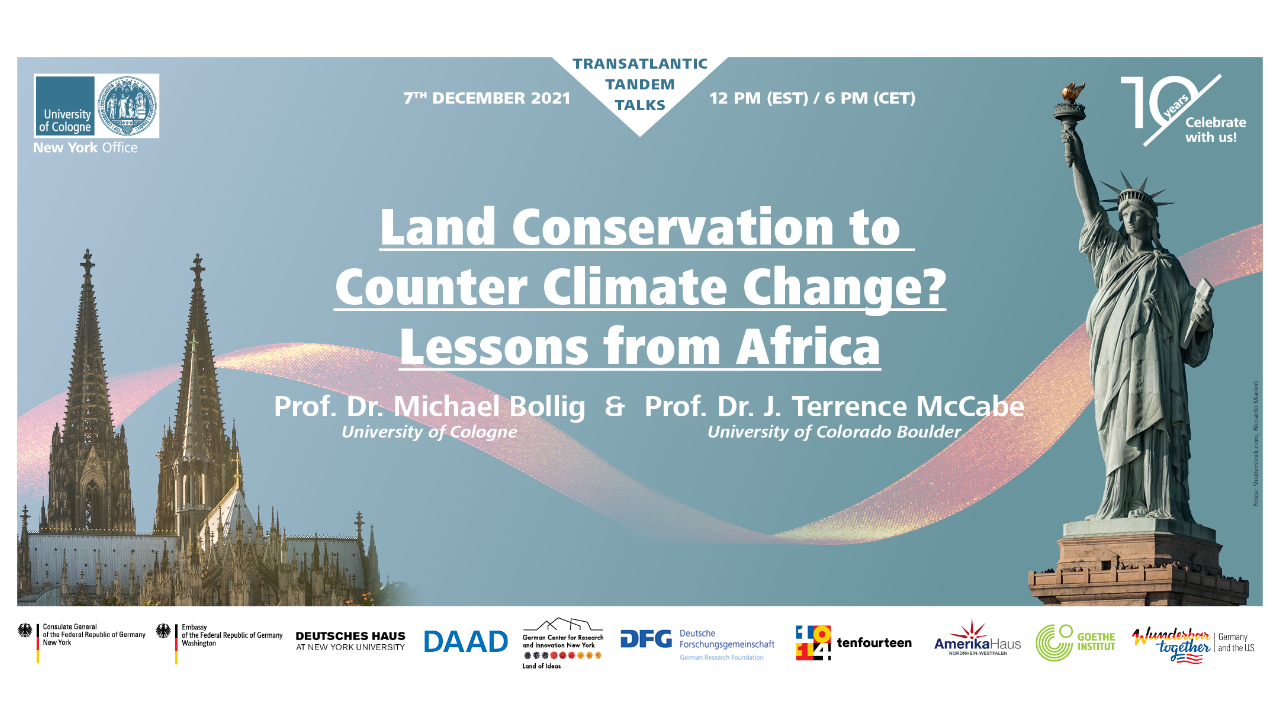 In Southern and Eastern Africa, rural communities face an increased frequency and intensity of disasters. From extreme drought to locust infestations and crop destruction – disasters and extreme events that used to occur once every 10 years – now deprive thousands of people of their fundamental existence on an almost annual basis.

The international community’s goal of protecting 30% of the world’s land by 2030 is intended to mitigate the effects of climate change, to protect biodiversity, and to support rural and tribal populations. But will it really?

Watch to learn about:

We were so happy that we had 259 RSVPS from over 40 different countries (!) and 111 were participating live. It was an absolute pleasure and truly one of the highlights this year, and such a great fit to celebrate the 10th anniversary of our North America Office!

Michael Bollig is Professor of Social and Cultural Anthropology at the University of Cologne where his key interests lie in the environmental anthropology of sub-Saharan Africa. He is currently speaker for the Cologne Global South Studies Centre. He has done work in northern Namibia and northern Kenya, working in both cases with nomadic pastoralists on topics ranging from conflict management to adaptation to drought-prone environments. His current research projects focus on the social-ecological dynamics connected to large-scale conservation projects, the commodification of nature and the political ecology of pastoralism. He is the author of “Shaping the African Savannah. From Capitalist Frontier to Arid Eden in Namibia” (2020), “Risk Management in a Hazardous Environment” (2006), co-author of “African Landscapes” (2009) with O. Bubenzer, “Pastoralism in Africa” (2013) with M. Schnegg and H.P. Wotzka, and “Resilience and Collapse in African Savannahs” (2017) with D. Anderson. In April 2021, he was awarded the ERC Advanced Grant for his REWILDING project, which focuses on the complex and ever-changing interactions among humans, flora, and fauna in the Kavango-Zambezi Conservation Area. The ERC Advanced Grant is considered the most important funding award in the European research landscape.

J. Terrence McCabe has been working among pastoral people in East Africa for over 40 years. His primary research emphasis has been on how people adapt to the arid and semi-arid rangelands of Kenya and Tanzania, and how they cope with changing environmental, social, economic, and political conditions. From 1980 to 1996 he worked among the Turkana of Kenya and from 1989 until the present among the Maasai of northern Tanzania. His book on Turkana pastoralism won the 2004 Julian Steward Award for the best book written in ecological anthropology. In 2009, Professor McCabe won an Alexander von Humboldt Research Award, which allowed him to spend the academic year working with colleagues at the University of Cologne. In 2020, Professor McCabe was elected as a fellow to the American Association for the Advancement of Science.

With Welcome Remarks by: