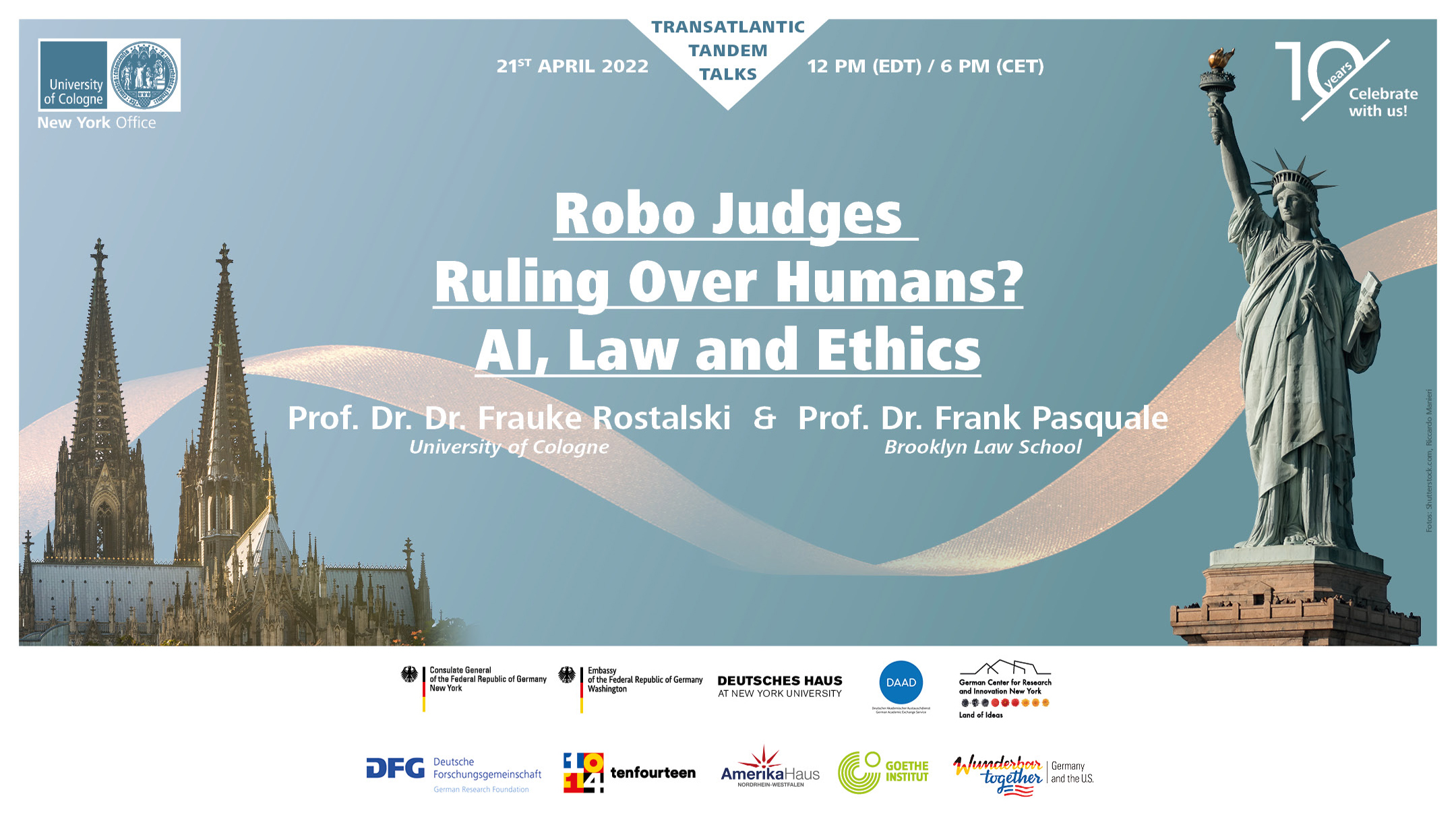 Should “Robo Judges” be allowed to rule over humans? Who is responsible for misjudgments made by products of artificial intelligence (AI)? How can privacy rights and transparency be accounted for when implementing automated decision-making?

Many legal and ethical questions revolve around artificial intelligence, especially when it comes to replacing human decisions with AI tools and algorithms in highly sensitive fields such as criminal justice, HR, or banking. Citizens have a right to understand and be able to challenge the data based on which they might be denied a loan, be required to pay more for health insurance, or be convicted for a crime. Are artificial hiring managers and robo judges innovative instruments that are fair, thorough, and effective while saving time and money? Or do humans have to make hiring decisions and carry out the law in order to ensure adequate judgment, and therefore justice?

Our experts from Germany and the U.S. will discuss these questions and shed light on differences and surprising similarities between approaches to artificial intelligence in both countries.

RSVP to learn about:

Frauke Rostalski holds the Chair of Criminal Law, Criminal Procedure Law, Philosophy of Law and Comparative Law at the University of Cologne. She studied law at the Philipps-Universität Marburg and received her doctorate in 2011. Following her second state law exam in 2013, she spent research stays at Nanjing University and Seoul University, and from 2016 to 2017 at the State University of New York, Buffalo. In 2017, she was awarded the venia legendi by the Philipps-Universität Marburg for the subjects of criminal law, criminal procedural law, philosophy of law, economic criminal law, medical criminal law and comparative law. In the same year, she received her doctorate in philosophy from the Friedrich Schiller University in Jena. Frauke Rostalski is a member of several scientific associations such as the working group "Responsibility: Artificial Intelligence and Machine Learning" at the Berlin-Brandenburg Academy of Sciences and Humanities.  At the University of Cologne, she founded the interdisciplinary research unit "Law and Ethics of Digital Transformation". Since January 2019, she has been responsible for the area of "Law" in the project “Certification of trustworthy AI”. Frauke Rostalski has launched several projects around the topics of digitization and criminal law. On the forefront is the “Criminal Courtroom of the future” (“Strafgerichtssaal der Zukunft”), which aims to replace manually produced protocols of trials with audiovisual recordings using AI. She also advises on legislative projects at state and federal level and has been a member of the German Ethics Council since April 2019.

Frank Pasquale is an expert on the law of AI, algorithms, and machine learning. He is a Professor of Law at Brooklyn Law School, an Affiliate Fellow at Yale University's Information Society Project, and a member of the American Law Institute. He was recently recognized as the third most cited U.S. law professor in the field of Law & Technology, based on the Sisk study's 2016-2020 reporting period. He is co-editor-in-chief of the Journal of Cross-Disciplinary Research in Computational Law (CRCL), based in the Netherlands, and a member of an Australian Research Council (ARC) Centre of Excellence on Automated Decision-Making & Society (ADM+S). His book The Black Box Society: The Secret Algorithms That Control Money and Information (Harvard University Press 2015) has been recognized as a landmark study on the law and political economy of information. His book New Laws of Robotics: Defending Human Expertise in the Age of AI (Harvard University Press 2020) rethinks the political economy of automation, to promote human capacities as the irreplaceable center of an inclusive economy.

This event is part of the Transatlantic Tandem Talks series:

The Transatlantic Tandem Talks are hosted on the occasion of the 10th anniversary of the North America office of the University of Cologne in New York in the year 2021 in cooperation with its partners the Consulate General of the Federal Republic of Germany in New York, the German Embassy in Washington D.C., Deutsches Haus at NYU, DAAD New York, the German Research Foundation (DFG) North America, the German Center for Research and Innovation (DWIH) New York, 1014 Space for Ideas, the Goethe Institute New York, AmerikaHaus NRW, and Wunderbar Together.