ONLINE AND IN PERSON 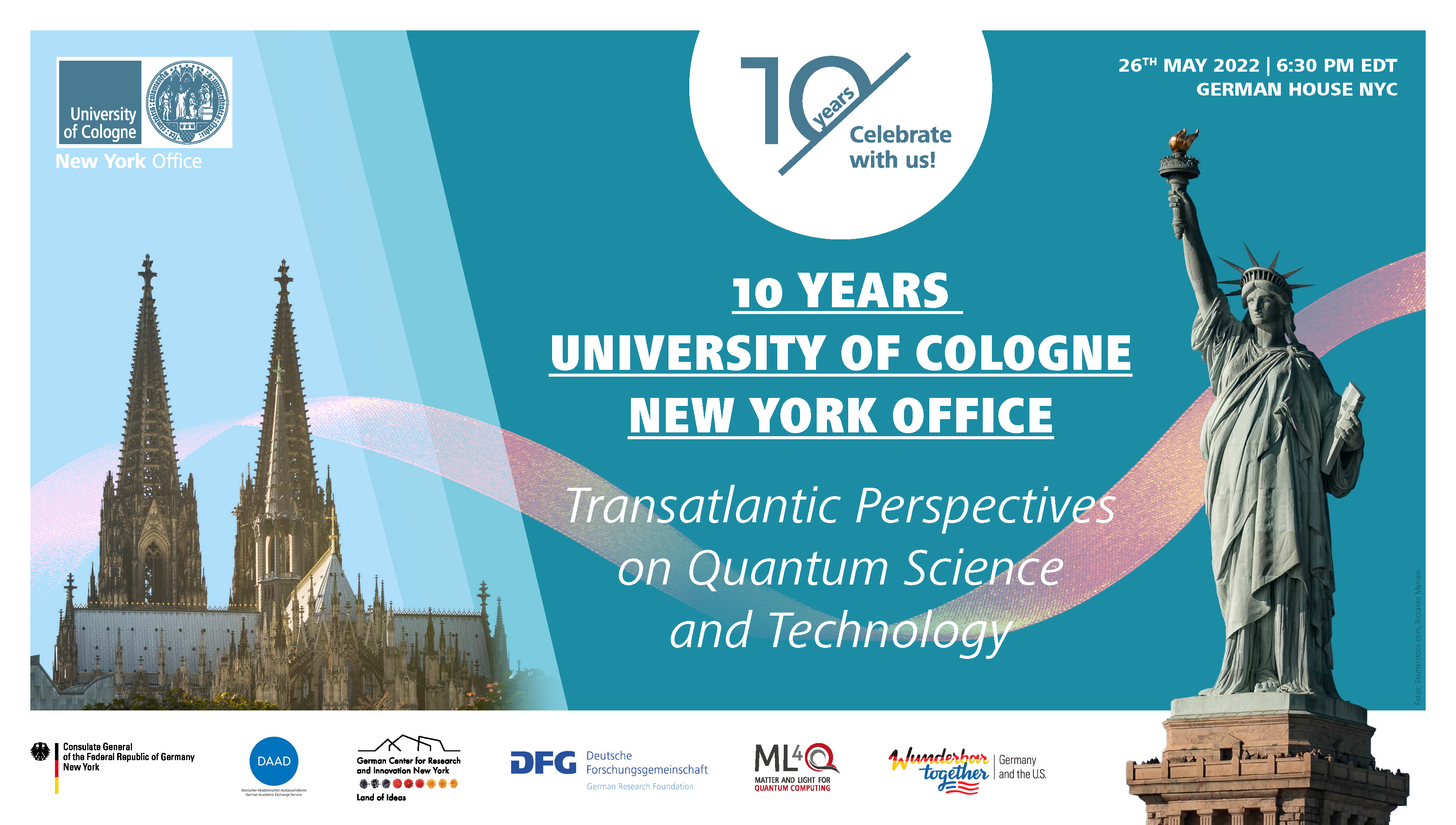 The University of Cologne’s North America Office celebrates its 10th anniversary with a festive in-person event at the German House in NYC, featuring art, music, networking, and the panel discussion “Transatlantic Perspectives on Quantum Science and Technologies.” On this occasion, we are honored to welcome a delegation from the University of Cologne, led by Rector Prof. Dr. Dr. h.c. Axel Freimuth.

The panel will highlight the Universities’ Research Cluster of Excellence “Matter and Light for Quantum Computing” (ML4Q) and its partner institutions in Germany and the U.S. The cluster develops state-of-the-art computing and networking architectures using the most recent findings from fundamental research in solid-state physics, quantum optics, and quantum information science.

Scientists have theorized about the potential of quantum computing for decades. But only in recent years have private and public sector investments in the development of quantum technologies grown significantly. Rapid advances in quantum technologies could revolutionize the world as we know it – from genomic sequencing to transport route optimization, from code-breaking to artificial intelligence.

- Hear perspectives from both sides of the Atlantic on quantum research, competition, and collaboration in the international quantum arena

- Enjoy music, art, and a networking reception following the panel

Please note that all attendees must show proof of vaccination upon arrival and wear masks during the event.

Tommaso Calarco has pioneered the application of quantum optimal control methods to quantum computation and to many-body quantum systems. Currently the Director of the Institute for Quantum Control of the Peter Grünberg Institute at Forschungszentrum Jülich and Professor of Quantum Information at the Institute of Theoretical Physics of the University of Cologne, Tommaso received his PhD at the University of Ferrara and started to work as a postdoc in the group of P. Zoller at the University of Innsbruck. He has authored in 2016 the Quantum Manifesto, which initiated the European Commission’s Quantum Flagship initiative, and is currently the Chairman of one of the Flagship’s Governing Bodies: The Quantum Community Network (QCN). In 2020, together with the QCN, he has launched an initiative towards the creation of a consortium of European quantum industries, which has been legally established in 2021 under the name of European Quantum Industry Consortium (QuIC).

Christopher Monroe is the Director of the Duke Quantum Center at Duke University, Gilhuly Family Presidential Distinguished Professor of Electrical and Computer Engineering and Physics at Duke, and College Park Professor of Physics at the University of Maryland. He is also the co-founder and Chief Scientist at IonQ, Inc. in College Park, MD, a public company that builds quantum computers based on the control of individual atoms. Monroe is an atomic and quantum physicist and engineer, with interests in fundamental quantum phenomena, quantum information science, and quantum computer design and fabrication. Monroe’s research group pioneered most aspects of ion trap quantum computers, making the first steps toward a scalable, reconfigurable, and modular quantum computer system. He is also an architect of the U.S. National Quantum Initiative and sits on advisory boards for quantum institutes in the U.S., Germany, the U.K., Singapore, and Canada.

Anna Grassellino is the Director of the National Quantum Information Science Superconducting Quantum Materials and Systems Center, a Fermilab Senior Scientist and the head of the Fermilab SQMS division. Her research focuses on radio frequency superconductivity, in particular on understanding and improving SRF cavities performance to enable new applications spanning from particle accelerators to detectors to quantum information science. Grassellino is a fellow of the American Physical Society, and the recipient of numerous awards for her pioneering contributions to SRF technology, including the 2017 Presidential Early Career Award, the 2017 Frank Sacherer Prize of the European Physical Society, the 2016 IEEE PAST Award, the 2016 USPAS prize and a $2.5 million DOE Early Career Award. She holds a Ph.D. in physics from the University of Pennsylvania and a master’s of electronic engineering from the University of Pisa, Italy.

Mikhail Lukin received the Ph.D. degree from Texas A&M University in 1998. He has been on a faculty of Harvard Physics Department since 2001, where he is currently George Vasmer Leverett Professor of Physics, and a co-Director of Harvard-MIT Center for Ultracold Atoms and of Harvard Quantum Initiative in Science and Engineering. His research interests include quantum optics, quantum control of atomic and nanoscale solid-state systems, quantum metrology, nanophotonic, and quantum information science. He has co-authored over 400 technical papers and has received a number of awards, including the Alfred P. Sloan Fellowship, David and Lucile Packard Fellowship for Science and Engineering, NSF Career Award, Adolph Lomb Medal of the Optical Society of America, AAAS Newcomb Cleveland Prize, APS I.I.Rabi Prize, Vannevar Bush Faculty Fellowship, Julius Springer Prize for Applied Physics, Willis E. Lamb Award for Laser Science and Quantum Optics, Charles Hard Townes Medal, and the Norman F. Ramsey Prize. He is a fellow of the OSA, APS, and AAAS and a member of the National Academy of Sciences.

The panel will be livestreamed on YouTube for anyone who wishes to tune in remotely and the recording will be made available on the University of Cologne YouTube channel.