There Are Black People in the Future 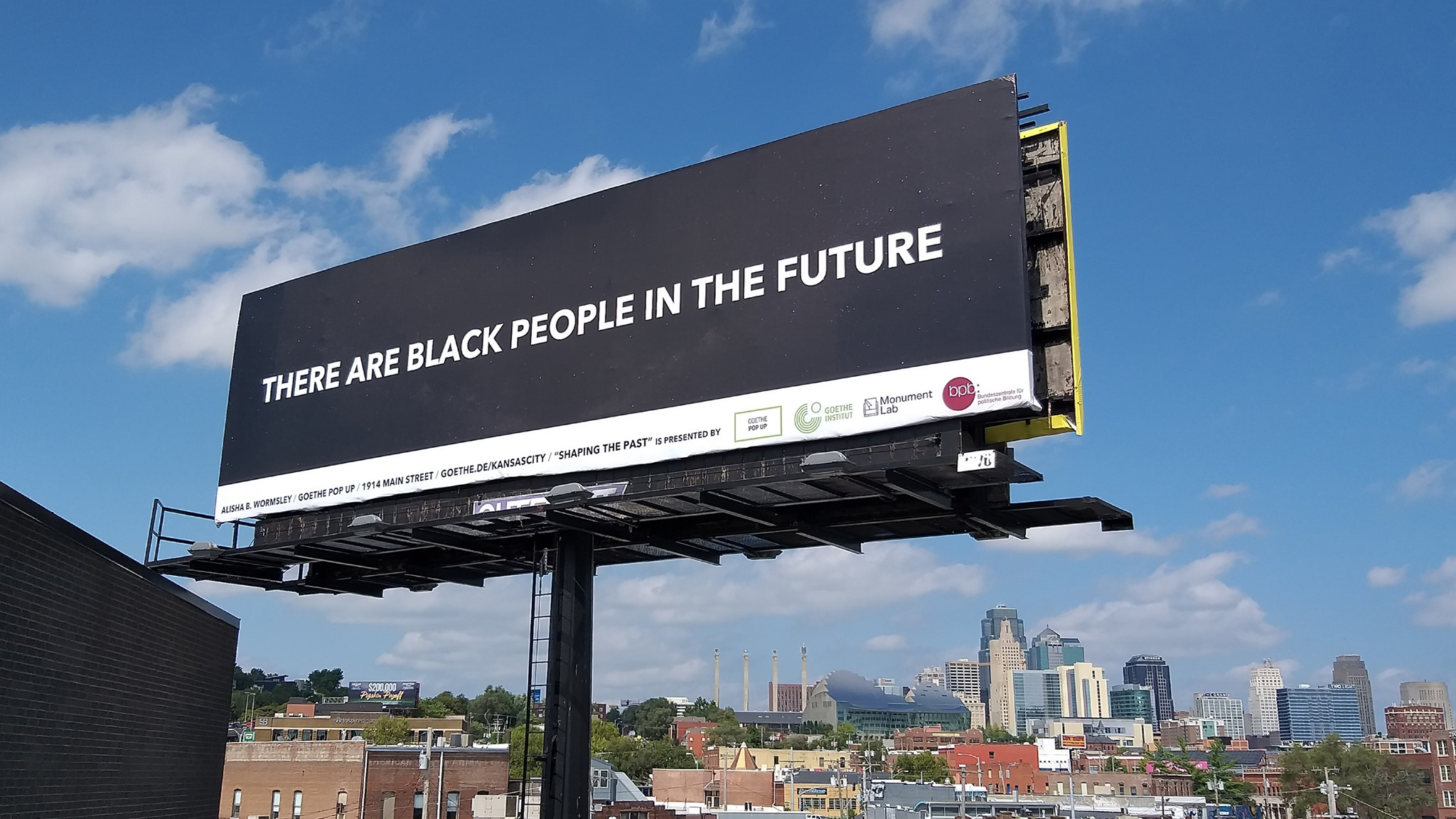 There Are Black People in the Future

The Goethe Pop Up Kansas City is excited to present There Are Black People in the Future, an afro-futurist project from Pittsburgh-based artist Alisha B. Wormsley. Wormsley’s project will be presented as part of the larger regional project Shaping the Past, which brings artists and activists together to highlight ongoing critical memory interventions in sites and spaces in North America and Germany.

‍There Are Black People in the Future is an afro-futurist interdisciplinary body of work that Wormsley began developing in 2012, which includes video, prints, collages, sculptures, and billboards. In 2018, the text was removed from a billboard in a newly gentrified neighborhood in Pittsburgh by developers. For Wormsley, its removal transformed this sentence into a movement, one in which the public was encouraged to use her words for the betterment of the world around them.

On September 10th, a billboard reading ”There Are Black People in the Future” will be displayed in the Crossroads at Broadway and Pershing. Contributing artists have been invited to respond to the billboard through visual and text. Each artist’s contribution will be installed on the Goethe Pop Up’s window front at 1914 Main Street and will be on display starting October 8th. The contributing artists include: Izsys Archer, Jessica Ayala, Arianna Bonner, Mona Cliff, Jose Faus, Sheri Purpose Hall, Glyneisha Johnson, Jada Patterson, and Harold Smith.

About Alisha B. Wormsley

Alisha B. Wormsley is an interdisciplinary artist and cultural producer. Her work is about collective memory and the synchronicity of time, specifically through stories of women of color.   Wormsley’s project, There Are Black People in the Future, is inspired by afro-futurist artists and writers who highlight the need for Black people to claim their place. Through the inscription and utterance of the words ”There Are Black People in the Future,” the project addresses systematic oppression of Black communities through space and time by reassuring the presence of Black bodies. In 2017, Wormsley placed these words on a billboard in East Liberty, a neighborhood in Pittsburgh’s east end. When the billboard was removed by the city, community members protested. Since then, the billboard has been replicated in various locations across the world. Wormsley’s work has received a number of awards and grants to support her programs including: The People Are The Light (part of the Hillman Photography Initiative), afronaut(a) film and performance series, Homewood Artist Residency, the Children of NAN film series and archive, and There Are Black People in the Future. These projects and works have been exhibited at the Andy Warhol Museum, Octavia Butler conference at Spelman University, Carnegie Museum of Art, Artup in Johannesburg, South Africa, Studio XX in Montreal, Project Row House, the Houston Art League, Rush Art Gallery in NYC, the Charles Wright Museum in Detroit, and the Mattress Factory in Pittsburgh. Over the last few years, Wormsley has designed several public artworks including Streaming Space, a 24-foot pyramid with video and sound, installed in Pittsburgh's downtown Market Square, and AWxAW, a multimedia interactive installation and film commission at the Andy Warhol Museum. Wormsley has an MFA in Film and Video from Bard College and was awarded the Postdoctoral Research fellowship in art at Carnegie Mellon University.

Shaping the Past is a partnership between the Goethe-Institut, Monument Lab, and the Bundeszentrale für politische Bildung (Federal Agency for Civic Education). The project connects to the activist and artistic work of local, national, and transnational movements as a reflection of memory culture and discusses new perspectives on forms of memory.