Story Porch: "Shaping the Past" in Seattle 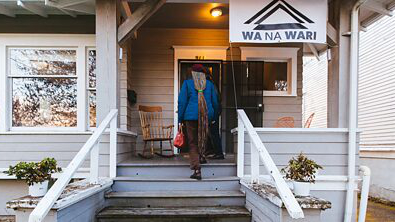 Story Porch: "Shaping the Past" in Seattle

How does one resist gentrification and displacement of Black spaces in Seattle? And how does one honor and continue the work and accomplishments of one’s ancestors? STORY PORCH is an interdisciplinary project that mixes diasporic African ancestral veneration, space-keeping, and neighborhood reinvestment in Seattle’s historically redlined Central District neighborhood on the land of the Coast Salish People.

In collaboration with Shaping the Past fellow Free Egunfemi Bangura and Goethe Pop Up Seattle, the Black arts organization Wa Na Wari will reactivate its front of house--a mediating structure between home and street, private and public--as a memory space, diving into the history of porch culture and nation building, and preserving the cultural tradition of generational storytelling.

Wa Na Wari is a center for Black art and culture in Seattle’s historically Black Central District, a neighborhood that was shaped by redlining. The organization addresses Seattle’s affordability crisis, changing demographics, and the aging Black residents’ experiences with isolation and economic hardship by creating spaces for Black ownership, possibility, and belonging through art, historic preservation, and connection.

Free Egunfemi Bangura is an independent historical strategist and social entrepreneur from Richmond, VA, and has been credited as the originator of the international Commemorative Justice movement. Her work focuses on ancestral remembrance and reclaiming memory culture by preserving memories of historically Black neighborhoods. In 2013, she founded Untold RVA and Untold Tours to inspire non-traditional audiences with bold typography, audio enhanced street art, and urban exploration.

Shaping the Past is produced in partnership with the Goethe-Institut, Monument Lab, and the Bundeszentrale für politische Bildung (Federal Agency for Civic Education). The project connects to the activist and artistic work of local, national, and transnational movements as a reflection of memory culture and discusses new perspectives on forms of memory.