"QUEERCORE: HOW TO PUNK A REVOLUTION" 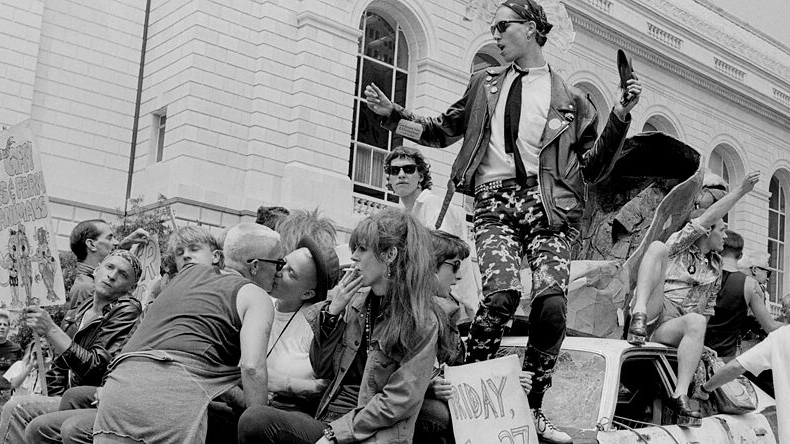 Film Stream: YONY LEYSER "QUEERCORE: HOW TO PUNK A REVOLUTION"

This film series is part of Queer as German Folk, a project celebrating the intersectional histories of Germany’s and America’s diverse LGBTIQ+ communities. A digitally modified version of the exhibition Queer as German Folk and a full program of virtual events is presented by the Goethe-Institut in North America in collaboration with its Goethe Pop Ups and the Schwules Museum Berlin (SMU). The film will be available to stream from September 25, 10AM CST to September 27, 11:59PM CST. Please register below to receive the streaming link by email. Advance registrants will receive the link on September 25, 10AM CST.

About the film: Documentary | Germany | 2017 | 83 min What happens when the community you need is not the community you have? Tell yourself it exists over and over, make fan zines that fabricate hordes of queer punk revolutionaries, create subversive movies, and distribute those movies widely—and slowly, the community you’ve fabricated might become a real and radical heartbeat that spreads internationally. This is the story that Queercore: How to Punk a Revolution tells, from the start of a pseudo-movement in the mid-1980s, intended to punk the punk scene, to the widespread rise of artists who used radical queer identity to push back equally against gay assimilation and homophobic punk culture. Interviewees discuss homophobia, gender, feminism, AIDS, assimilation, sex, and, of course, art. The extensive participant list includes Bruce LaBruce, G.B. Jones, Beth Ditto, Genesis Breyer P-Orridge, John Waters, Justin Vivian Bond, Lynn Breedlove, Silas Howard, Pansy Division, Penny Arcade, Kathleen Hanna, Kim Gordon, Deke Elash, Tom Jennings, Team Dresch, and many more.