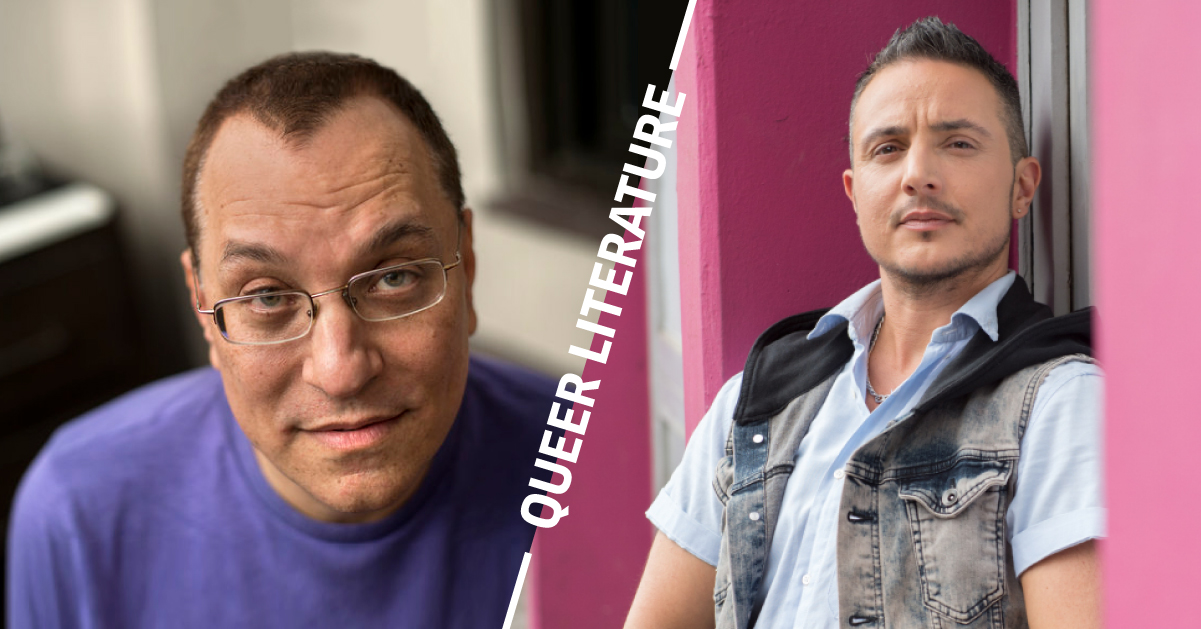 The Goethe Pop Up Kansas City and the Goethe-Institut Boston present Queer Literature from Germany and the US. Join us for our first event as we welcome Berlin-based author and spoken word artist Jayrôme Robinet and writer and disability rights activist Kenny Fries from New York for a reading followed by a conversation between the authors. This virtual event will be moderated by Dr. Robert D. Tobin.

This event is part of Queer as German Folk, a project celebrating the multilayered histories of Germany’s and America’s diverse LGBTIQ+ communities. A digitally modified version of the exhibition Queer as German Folk and a full program of virtual events are presented by the Goethe-Institut in North America in collaboration with its Goethe Pop Ups and the Schwules Museum Berlin (SMU). Click [here] for more information on the event series.

Jayrôme C. Robinet, born 1977 in France, is a writer, translator, and spoken word performer. He has published two volumes of short stories in France. His German-language debut Das Licht ist weder gerecht noch ungerecht (“Light Is Neither Fair Nor Unfair”) premiered in 2015 at Maxim Gorki Theatre as a one-person play. Mein Weg von einer weißen Frau zu einem jungen Mann mit Migrationshintergrund (“How I went from being a white woman to a young migrant boy”) was published in 2019. In it, he tells his personal story and talks about his queer life. Robinet holds a MA in Biographical and Creative Writing, teaches Creative Writing at the Alice Salomon University of Applied Sciences Berlin, and is pursuing a Ph.D. in Performance Poetry at the DFG Graduate School at the Berlin University of the Arts in Berlin. He has received a number of awards and grants.

Kenny Fries is the author of Body, Remember: A Memoir (1997), The History of My Shoes and the Evolution of Darwin’s Theory (2007), and In the Province of the Gods (2017). Fries’ work has appeared in The New York Times, Washington Post, Kyoto Journal, and in many other publications and anthologies. His work has been translated into Spanish, German, French, and Japanese. Fries is recipient of a Rockefeller Foundation Bellagio Center Arts and Literary Arts Fellowship, and he was a Creative Arts Fellow of the Japan-U.S. Friendship Commission as well as of the National Endowment for the Arts. He has twice been a Fulbright Scholar (Japan and Germany), and has received grants from the German Academic Exchange Service (DAAD) and the Canada Council for the Arts, among others. He teaches in the MFA in Creative Writing Program at Goddard College in Vermont.

Dr. Robert D. Tobin is the inaugural occupant of the Henry J. Leir Chair in Language, Literature, and Culture at Clark University in Worcester, Massachusetts, where he teaches comparative literature with an emphasis on German Studies. Tobin's areas of expertise include LGBTIQ+ studies, queer theory, gender studies, human rights, and German and European cultural studies.

This event takes place on Zoom. Registration is required.