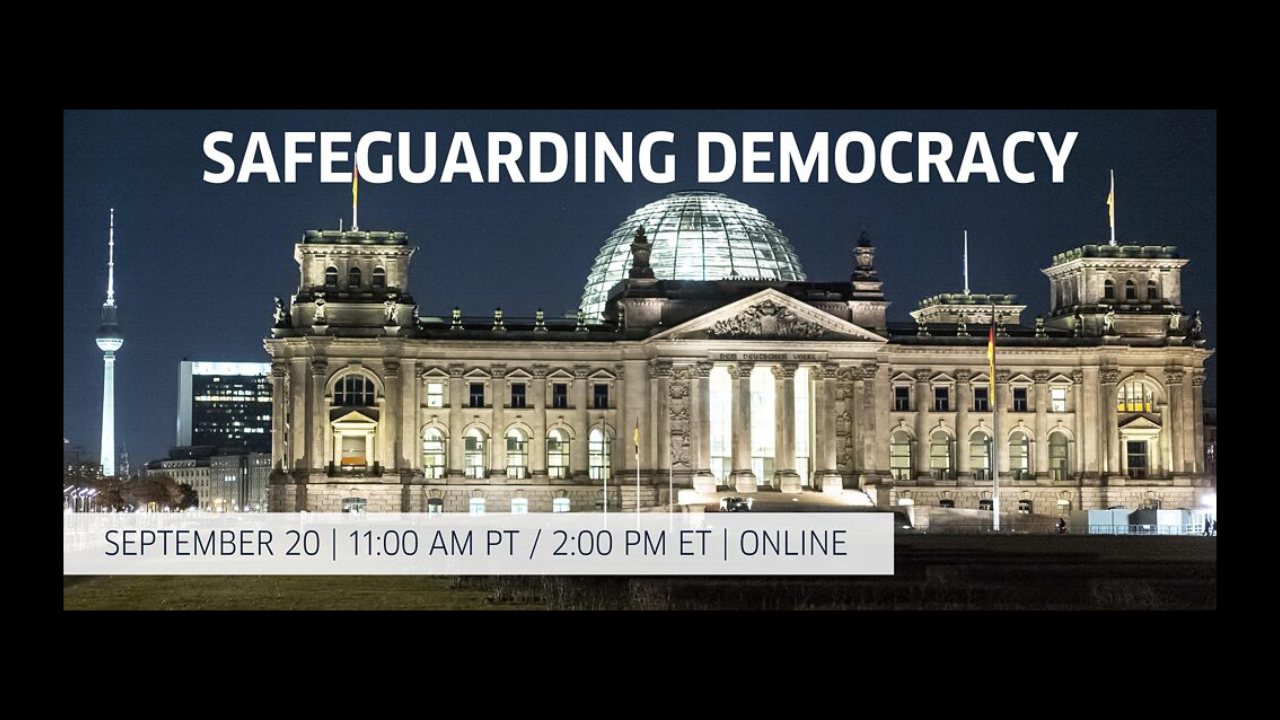 SAFEGUARDING DEMOCRACIES: Social Media and Populist Narratives in Germany and the U.S.

The U.S. elections in 2020 and the storm on the Capitol in Washington DC that followed suit underlined once more the influence of social media on the democratic process. In light of the general elections in Germany in September 2021, the German Consulate General in San Francisco together with the Institut für Auslandsbeziehungen (ifa), the Center for West European Studies of the University of Washington, and the Goethe Pop Up Seattle invite you to the virtual transatlantic conversation on Safeguarding Democracies: Social Media and Populist Narratives in Germany and the U.S. as part of the lecture series of the Federal Republic of Germany.

Markus Beckedahl, co-founder of re:publica, network political activist and journalist, and Lance Bennett, the Emeritus Ruddick C. Lawrence Professor for Communication at the University of Washington, will discuss the social media narratives surrounding the U.S. and the German elections, as well as approaches by governments, civil society, and business to limit the spread of misinformation and fake news.

The event will be moderated by Paulina Fröhlich, program director of Future of Democracies at Das Progressive Zentrum. Oliver Schramm, German Consul General in San Francisco, will provide opening remarks.

This event will take place online at 11:00 am PDT. Please register via Eventbrite to receive Zoom access info.

Markus Beckedahl is the co-founder of re: publica, a conference on digital society and social media. He is a network political activist and journalist and was editor-in-chief until 2013 of Netzpolitik.org, a blog he founded in 2002 on information society. From 2010 to 2013 he was an expert in the Enquete Commission of the German Bundestag on internet and digital society. He is the author and editor of various books on issues relating to the digital world and has received numerous prizes and awards, including the Grimme Online Award in the Special Category and the Günther ‐ Wallraff‐Journalism Critique Award.

‍Lance Bennett is Emeritus Ruddick C. Lawrence Professor Communication, Emeritus Professor of Political Science, and Senior Research Fellow at the Center for Journalism, Media and Democracy at the University of Washington. He has lectured and published on media and information systems, press-government relations, citizenship and civic engagement, digital activism, and problems of disinformation in democracies. His current work focuses on better aligning environment, economy and democracy to build more equitable and sustainable societies. His publications include The Logic of Connective Action (Cambridge 2013), The Disinformation Age (open access, Cambridge 2020), and Communicating the Future: Solutions for Environment, Economy and Democracy (Polity 2021).

Paulina Fröhlich is the head of the “Future of Democracy” program at Das Progressive Zentrum in Berlin. She directs innovative dialogue projects, such as "Europa Hört," designs and curates Innocracy, a conference on democratic transformation, and co-authors discussion papers. Fröhlich also heads the development of the digital platform "European Hub for Civic Engagement." Previously, Paulina worked in water management and development cooperation. In 2016 she co-founded the initiative "Kleiner Fünf," which developed the strategy of "radical politeness" to counter right-wing populism.

Oliver Schramm, German Consul General San Francisco since August 2021, entered the German Foreign Service in 1991 and served in Seoul, Washington D.C., Rome, Lima, and most lately, London, in between stints in Berlin, Germany. In 2002 he received a MPA from the Kennedy School of Government at Harvard University.