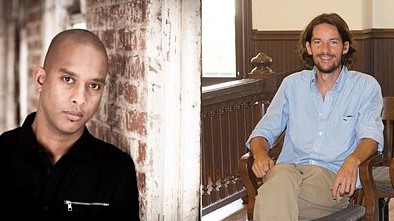 The Goethe Pop Up Kansas City invites you to join them for a conversation about “Memory Culture in Film: Commemorating Emmett Till” between Shaping the Past-Fellow and Executive Director of the Emmett Till Interpretive Center Patrick Weems and Keith Beauchamp, director of the documentary The Untold Story of Emmett Louis Till (2005).

The conversation will touch on how history can be shaped through film, and how film can serve as a medium of activism. Our speakers will reflect on the memory of Emmett Till, a 14-year old African American boy who became a victim of a brutal lynching in Mississippi in 1955. Beauchamp and Weems will also explore how the narrative around Till’s memory has changed, and how their work continues to seek justice for Till through the shaping of public memory. The conversation will be followed by a Q&A between the speakers and the audience.

Patrick Weems co-founded and serves as director of the Emmett Till Interpretive Center in Sumner, Mississippi, which uses art and storytelling to share the Emmett Till tragedy and facilitate racial healing. A graduate of the University of Mississippi, Weems holds a Master’s degree from the Center for the Study of Southern Culture. He was recently awarded a Fellowship from the W. K. Kellogg Foundation and is Monument Lab 2020 Fellow in the project Shaping the Past.

Keith Beauchamp attended Southern University in Baton Rouge, Louisiana, where he studied criminal justice. In 1999, Beauchamp founded Till Freedom Come Productions, a company devoted to socially significant projects that can both teach and entertain. He has devoted the past 22 years of his life telling the story of Emmett Till and has traveled extensively between New York, Chicago, and Mississippi to investigate the historic murder. During his travels, he became friends with Mamie Till Mobley, the mother of Emmett Till. Beauchamp is currently the executive producer and host of Investigation Discovery’s crime reality series, The Injustice Files and the producer of the upcoming feature film Till. He is also a frequent lecturer at colleges and universities around the country.

This event takes place on December 3rd, at 5:00 pm CST on Zoom. Registration is required—please use the link below to register. https://us02web.zoom.us/webinar/register/WN_8H4hu4VBQf-pWi-KOX7_Qw