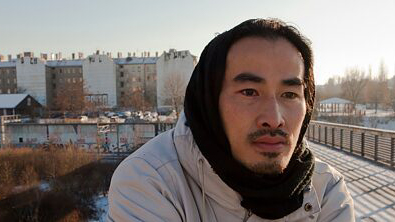 ‍
Goethe Pop Up Seattle partners with Northwest Film Forum to present the documentary From Here as part of the Local Sightings Film Festival 2020, providing regional filmmakers with powerful exposure.

A story of artists and activists from immigrant families redefining belonging.

A documentary set in Berlin and New York, From Here is a hopeful story of four young artists and activists from immigrant families redefining belonging in an era of rising nationalism globally.

The stream will include a pre-recorded Q&A with Seattle-born filmmaker Christina Antonakos-Wallace and Miman Jasarovski, one of the film’s German-based subjects. This screening will take place online. Please register in advance and pay what you can. All ticket purchases support Northwest Film Forum.

From Here is a hopeful story of artists and activists based in Berlin and New York whose lives hang in the balance of immigration and integration debates. The four protagonists move from their 20s into their 30s as they fight for citizenship, start families and find room for creative expression. This sensitive, nuanced documentary captures their journeys to define what it means to “belong” in societies that are increasingly hostile to their existence.

Filmed over a decade in two of the world’s largest immigration countries – the U.S. and Germany – these individuals’ stories echo those of millions of young people from immigrant families coming of age during this era of rising nationalism. From Here showcases not only their struggles, but their enormous power.

Christina Antonakos-Wallace (Director/Producer/Camera) is a filmmaker and activist. Awards for her short films include the Euromedia Award for Culture & Diversity (2011), a Media that Matters Change Maker Award (2012), and recognition from the German Alliance for Democracy and Tolerance (2015). Her work has shown in over a dozen countries in diverse contexts from Google Headquarters, to NGOs, to film-festivals. Commissions and grants for her work include the New America Foundation, Seattle Office of Arts and Culture, and the German Ministry for Civic Education. She has held residencies at Hedgebrook (2017) and the Port Townsend Film Festival (2015). She graduated with a BFA/BA from the New School & Parsons School of Design with honors. Her work was recognized with a five-year MTV Fight For Your Rights Scholarship (2002) and a Humanity in Action Fellowship (2006), which she completed at the United Nations High Commission on Refugees, in Berlin.

From Here is a personal project that grew from questions of how to advance racial equity in an era of globalization, and the search for her own sense of belonging in the context of her family’s migrations.