US-German and trans-Atlantic relations in the 21st century:

Launch of the Fritz Stern Chair 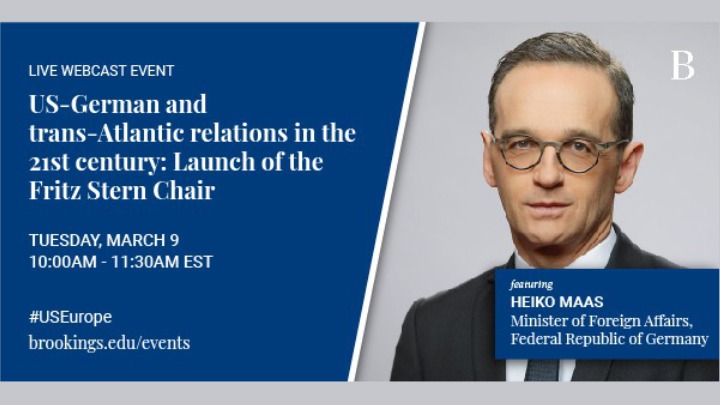 US-German and trans-Atlantic relations in the 21st century: Launch of the Fritz Stern Chair

Since the end of the Second World War, trans-Atlantic relations have been the bedrock of the rules-based international order. The development of a prosperous, democratic, and reunited Germany stands as a testament to the results of more than 75 years of trans-Atlantic cooperation. Today, the United States, Germany, Europe, and the larger international order are beset by numerous challenges, from illiberal actors at home to challenges posed by authoritarian strategic competitors like China and Russia.

On Tuesday, March 9, Foreign Policy at Brookings will host German Foreign Minister Heiko Maas for a keynote address in honor of the launch of the Fritz Stern chair, followed by a panel discussion considering the current state of U.S.-German and U.S.-European relations and the prospects for reform to best address the challenges of the 21st century.

Viewers can submit questions by emailing events@brookings.edu or on Twitter using the hashtag #USEurope.