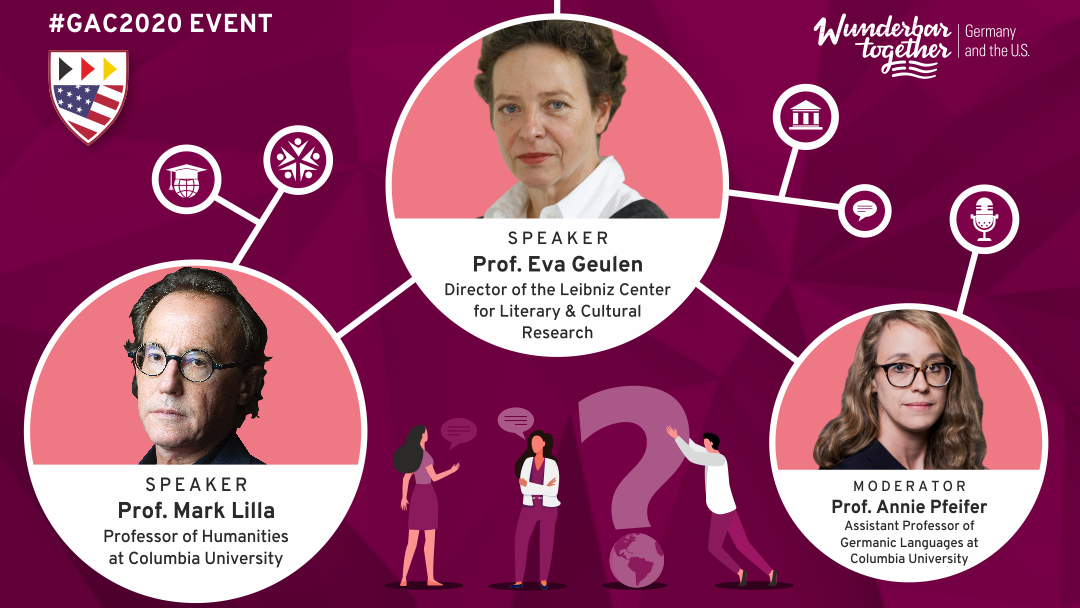 ‍
As American and European societies define and redefine themselves, much of their discourse around identity and commonality plays out not only in the political sphere but also within academia. To what extent do questions of identity and belonging hold together and/or delimit society, and what role does academia play in this self-definition? In an attempt to further understand this intersection of politics and academia, the German American Event Series at Harvard presents: A virtual conversation between Prof. Eva Geulen and Prof. Mark Lilla, moderated by Prof. Annie Pfeifer.

The speakers will share how their scholarship explores the relationship between identity and politics and look at both theoretical and practical dimensions of identity politics on both sides of the Atlantic. Some guiding questions will include how party politics in the U.S. and Germany may use and abuse identity, whether identity serves as the right framework for promoting change and cohesion, and what role academia has in shaping this debate.

The moderator, Prof. Annie Pfeifer, will use following questions as the main framework for discussion, followed by an audience Q&A:

- How does your scholarship explore the politics of identity, or the relationship between identity and politics more broadly?

- How would you define identity politics? Are its roots academic or political (or both)? Do you consider its theoretical or practical implications problematic (or neither)?

- How does identity politics shape and influence party politics on both sides of the Atlantic? E.g. populist parties in Germany, and the recent U.S. election.

- Is identity politics the right tool/framework to promote change and assert civil liberties? To create social cohesion and collectivity? Does identity politicize or de-politicize? What alternative models may work?

- What role does academia have in shaping the debate around identity politics?