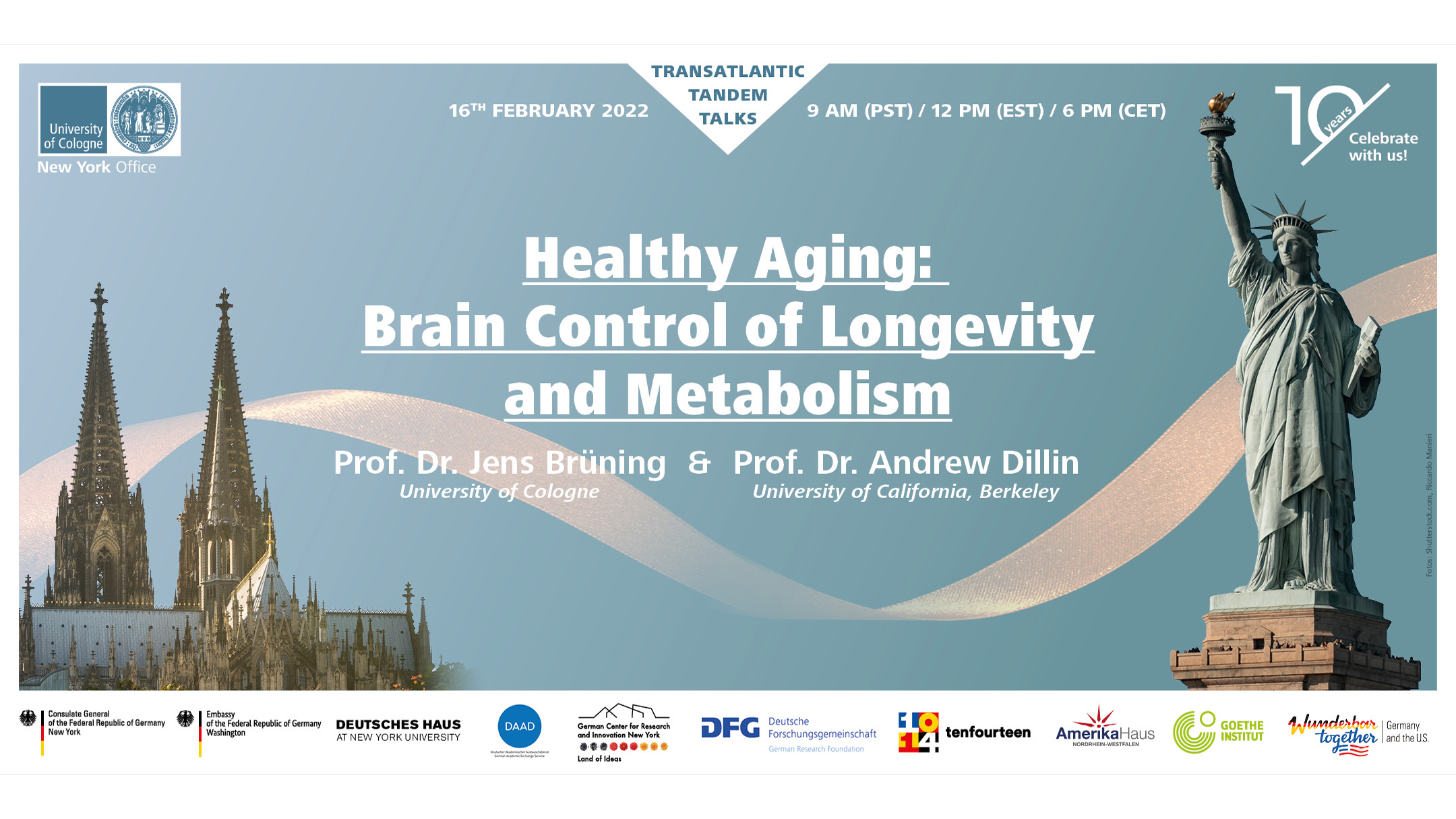 Why do we age? What exactly happens to our body as we age? And how do our every-day choices affect our aging process?

In aging populations, these questions become more and more pressing as aging-associated and neurodegenerative diseases such as Alzheimer’s, Parkinson’s and diabetes mellitus increasingly strain our health systems. Understanding the molecular mechanisms involved in degenerative aging processes can help develop new therapeutic approaches that lead to a healthier way of living for older and ill individuals, and eventually for us all.

RSVP to learn about:

This Transatlantic Tandem Talk highlights the work of the Cluster of Excellence on Aging Research at the University of Cologne CECAD, funded by the German Research Foundation (DFG).

Dr. Jens Brüning is Director of the Max Planck Institute for Metabolism Research in Cologne and Director at the Policlinic for Endocrinology, Diabetes and Preventive Medicine at the University Hospital in Cologne. His research focuses on elucidating the CNS-dependent regulation of energy and glucose metabolism. These studies show the previously unappreciated role that insulin action plays in the central nervous system (CNS), controlling organismal glucose homeostasis and insulin sensitivity. His group has defined distinct Agouti-related peptide (AgRP)-expressing neurons in the hypothalamus as critical mediators of insulin's metabolic actions, revealing the molecular mechanisms of insulin action in these neurons as well as their alterations in obesity. More recently, using neurocircuitry mapping techniques his group defined the projections of these AgRP-neurons within the CNS, which govern insulin-dependent control of systemic insulin sensitivity via the regulation of autonomic innervation Dr. Brüning’s many awards include the DFG’s Gottfried Wilhelm Leibniz Prize in 2007 and the Ernst Jung Prize for Medicine in 2009. He is one of the Principal Investigators at the Cluster of Excellence on Aging Research (CECAD) at the University of Cologne.

Dr. Andrew Dillin is Professor of Genetics, Genomics, and Development and an Investigator at the Howard Hughes Medical Institute at the University of California, Berkeley. His lab focuses on the questions of why an aging organism begins to lose control over the integrity of its proteome, and how this loss is communicated across its various tissues. Working in model systems ranging from stem cells to nematodes to mice, his team has developed and applied techniques that allow manipulation of signaling pathways or proteins within a tissue, a single cell, or a single organelle, so they can observe the effect of that small perturbation on the physiology of a whole organism. Dillin’s work aims to shed light on the developmental processes of human neurodegenerative diseases, such as Alzheimer’s, Huntington’s, and Parkinson’s diseases. Dillin has been awarded the Siebel Distinguished Char Award in Stem Cell Biology, the Nathon Shock Award, and the McKnight Neuroscience of Brain Disorders Award, among others. He is a former member of the Global Faculty Program at the University of Cologne.

The Transatlantic Tandem Talks are hosted on the occasion of the 10th anniversary of the North America office of the University of Cologne in New York in the year 2021 in cooperation with its partners the Consulate General of the Federal Republic of Germany in New York, the German Embassy in Washington D.C., Deutsches Haus at NYU, DAAD New York, the German Research Foundation (DFG) North America, the German Center for Research and Innovation (DWIH) New York, 1014 Space for Ideas, the Goethe Institute New York, AmerikaHaus NRW e. V., and Wunderbar Together.