Germany’s Leadership in the EU Today 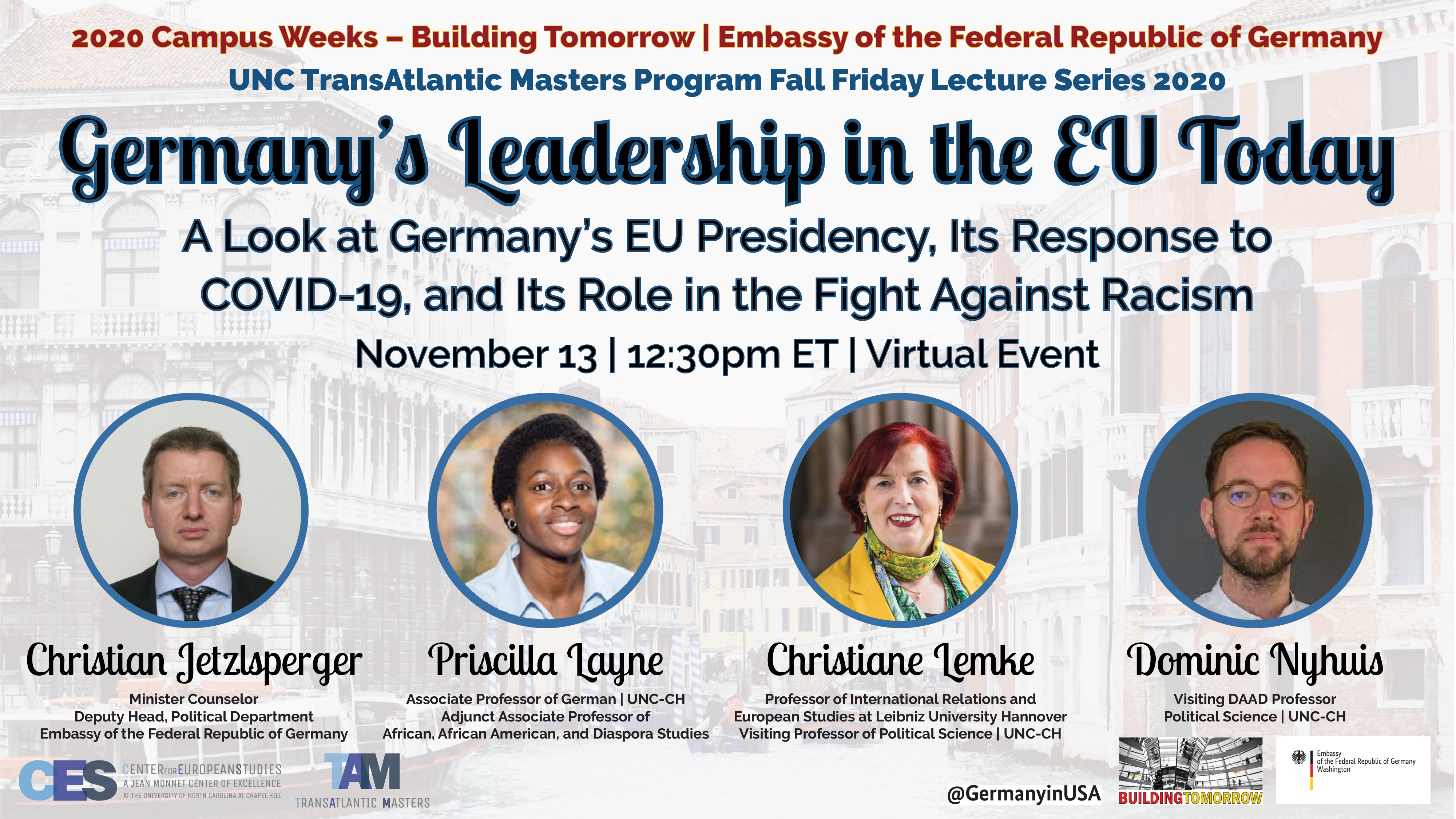 Germany’s Leadership in the EU Today: A look at Germany’s EU Presidency, its response to COVID-19, and its role in the fight against racism

This event is part of the 2020 Campus Weeks — Building Tomorrow initiative sponsored by the Embassy of the Federal Republic of Germany.

On July 1, Germany assumed the Presidency of the Council of the EU with a plan of “going green”. Germany is currently being analyzed and praised for its response to COVID-19, with its very low death rate, while working to keep the economy going. And Germany is quite a diverse country yet anti-immigrant sentiment is present. How is Germany addressing all of these issues? The panelists will address questions including: How has Germany’s EU presidency gone? What has Chancellor Merkel accomplished? What has Germany done correctly regarding COVID-19 and why have they been so successful? At a time when the protests in the US surrounding anti-Black racism are catching on in Germany, how has Germany responded? How are other EU countries looking to Germany as a positive example?

The discussion will be moderated by Katie Shanahan Lindner, executive director of the UNC Center for European Studies.

Christian Jetzlsperger currently serves as Minister Counselor and Deputy Head of the Political Department of the German Embassy in Washington, DC. He previously headed the Division for Stabilization Policy within the newly created Directorate-General for Crisis Prevention, Stabilization, Post-Conflict Peacebuilding, and Humanitarian Assistance at the Federal Foreign Office in Berlin. Christian Jetzlsperger joined the Federal Foreign Service in 2003 and has since served at the German Embassies in Albania (2004-2007) and Afghanistan (2009-2011). From 2011 to 2013, he was Deputy Head of Mission at the German Representative Office in Ramallah, and between 2013 and 2014, Head of Political Section and Chargé d’affaires a.i. at the European Union Delegation in Yemen. Christian Jetzlsperger holds an M.A. in history and political science from Ludwig Maximilians-Universität in Munich. Before joining the foreign service, he worked as assistant professor at the Universities of Bonn and Erfurt; from 2003 to 2004, he was a research fellow at the European University Institute in Florence, Italy.

Priscilla Layne is Associate Professor of German in the Department of German and Slavic Languages and Literatures; and Adjunct Associate Professor of African, African American, and Diaspora Studies at the University of North Carolina at Chapel Hill. Professor Layne has guest lectured at Tübingen University and at the University of Bremen. Prof Layne focuses on sci-fi, cinema, and Black culture in Germany and Europe. Her first book, White Rebels in Black: German Appropriation of Black Popular Culture was published in 2018 by the University of Michigan Press. She is also the co-editor of the volume Rebellion and Revolution: Defiance in German Language, History and Art (2008). She is currently working on a monograph, Out of this World: Afro-German Afrofuturism. She held a Fellowship at the American Academy in Berlin in fall 2018. She has published articles on German film, literature, translation and music in German Studies Review, the Women in German Yearbook and Colloquia Germanica. Prof Layne is on the Board of the German Studies Association and Vice President of the American Association of Teachers of German.

Christiane Lemke is Professor of Political Science and Director of International Relations and European Studies at the Institute of Political Science at Leibniz University Hannover. Professor Lemke has been very involved in Center for European Studies teaching, research, and conferences for many years. She has been teaching in UNC-Chapel Hill’s Transatlantic Masters (TAM) program for over a decade and has been a recurring DAAD Visiting Scholar to UNC since 1988. In addition to her current position, Christiane Lemke, from 2010-14, held the Max Weber Chair at New York University. Professor Lemke received her Ph.D. from the Faculty of Philosophy and Social Sciences at the Free University in Berlin and went on to earn her Habilitation Venia legendi in Political Science from the same institution. Professor Lemke has been a visiting scholar at a number of US institutions over the years as she has maintained her permanent faculty positions in Germany. She has taught courses at UNC-Chapel Hill, Stanford University, Harvard University, and Suffolk University. In addition, while on a leave from the University of Hannover from 2006 to 2007, Professor Lemke served as the Director of State Parliament, Lower Saxony. Professor Lemke’s academic areas of expertise include: European Politics, Democracy and Governance in the EU, Transatlantic Relations, Comparative Politics and Political Theory, and American Politics. She is the author/editor of numerous books and articles, including: Internationale Beziehungen: Grundkonzepte, Theorien und Problemfelder, 4th ed. (International Relations: Concepts, Theories, and Key Issues, 2018); Germany Today. Politics and Policies in a Changing World, 2018; Europäische Außen- und Sicherheitspolitik (European Foreign and Security Policy, 2010), Menschenrechte und Migration (Human Rights and Migration, 2009).

Dominic Nyhuis is Visiting DAAD Professor of Political Science at the University of North Carolina at Chapel Hill. Professor Nyhuis received his PhD from the University of Mannheim for a project on the link between district preferences and candidate communication in German elections. His research on European and German politics focuses on party politics, legislatures, and subnational politics. With a background in quantitative methods, he is particularly interested in how the digital transformation changes research practices in the social sciences. To this end, he has worked on the automated collection of large-scale web data, as well as tools for the analysis of text and video data. Professor Nyhuis currently teaches undergraduate European Studies and Political Science majors as well as students in the TransAtlantic Masters Program.

The Embassy of the Federal Republic of Germany