GAC 2021: War in the Media - The Impact of Conflict Coverage on Civil Society 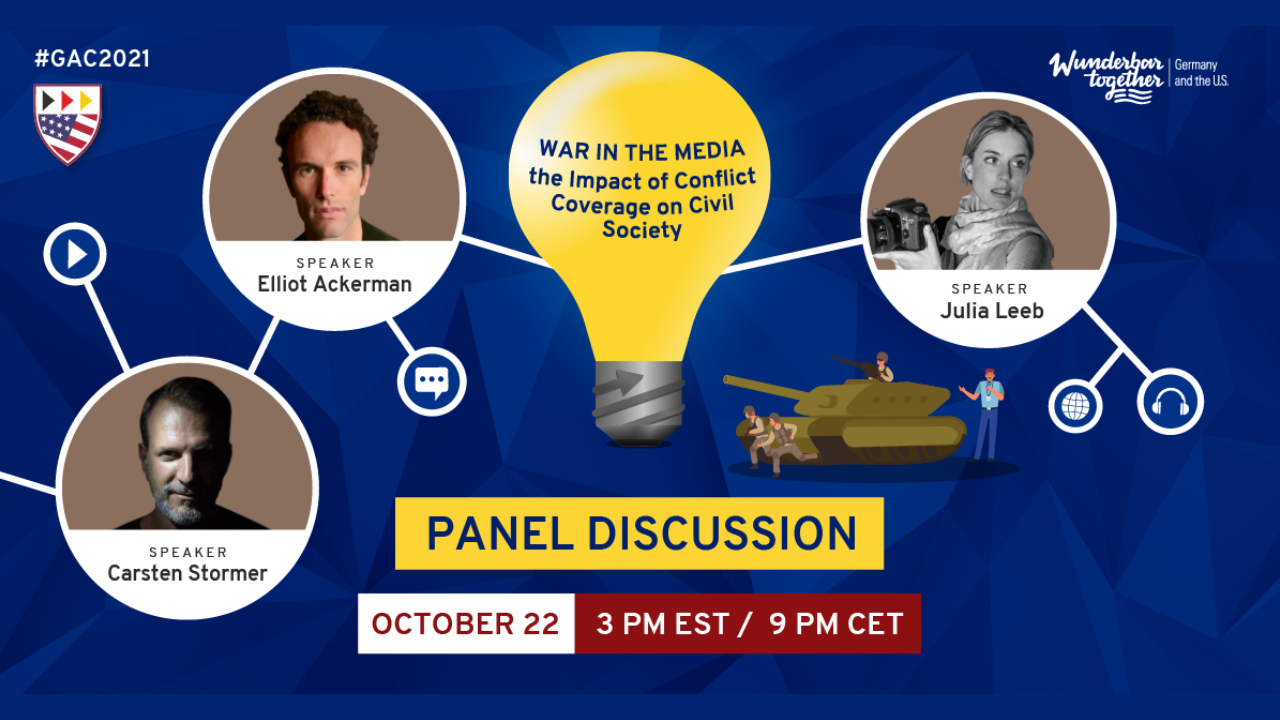 Throughout political history, war has been a fundamental element of politics. It is evident even in today’s political dynamics and decisions. Controversies surrounding war handling and its subsequent refugee crisis,human rights violations, and emerging war economies divide not only party lines but entire societies. The dynamics of war develop quickly and challenge traditional ideas of wars and patterns of political reaction. Although wars are becoming increasingly complex phenomena to understand, media reporting around wars has increased more than ever.

War journalists all around the globe risk their lives to report from battle zones. Through their work, they exercise significant influence on the public opinion in their home societies. Their reporting impacts the way people think about war and also influences notions of foreign and domestic policies. Hence, in this panel, we intend to look at modern ways to represent war in the media and reflect the consequences of war coverage. For this purpose, we will compare war coverage in Germany and the United States and discuss how war coverage transforms societies of both countries. Keeping this in mind, the panelists will give an outline of the responsibilities of war journalists towards society and explain how they aesthetically depict war in articles, novels, pictures, or Virtual Reality and how their reports influence the developments of the wars they are talking about.

- Elliot Ackerman is both: a former White House Fellow and a Marine who served five tours of duty in Iraq and Afghanistan, where he received the Silver Star, the Bronze Star for Valor, and the Purple Heart. He became famous as a war journalist and the author of the novels 2034, Red Dress In Black and White, Waiting for Eden, Dark at the Crossing, and Green on Blue, as well as the memoir Places and Names: On War, Revolution and Returning. His books have been nominated for the National Book Award, the Andrew Carnegie Medal in both fiction and non-fiction, and the Dayton Literary Peace Prize among others. His writing often appears in Esquire, The New Yorker, and The New York Times where he is a contributing opinion writer, and his stories have been included in The Best American Short Stories and The Best American Travel Writing.

- Julia Leeb is a German journalist, photographer and filmmaker who specialised in the production of Virtual Reality content. She studied International Relations and diplomacy in Madrid and digital media in Munich. During a year-long stay in Alexandria, Egypt she had the opportunity to learn Arabic. Today, Julia Leeb is reporting from some of the most dangerous and most unknown areas of the world, such as Syria, Libya, Southsudan, Afghanistan, and North Korea. Besides working for several News Agencies, Leeb focuses on a number of long term projects. By using Virtual Reality solutions, she tries to offer new perspectives on wars to show aspects that remain hidden in traditional war coverage.

- Carsten Stormer is a German war journalist. He studied Journalism in Bremen, Germany and at the Indian Institute of Technology in Chennai. Since 2004 he has been reporting from conflict zones such as Afghanistan, Iraq, Syria and Uganda. He now lives in the Philippines, filming for large German broadcasting channels such as ARD and ZDF. His work has appeared in the New York Times, Der Spiegel, GEO, Die Zeit and many more.