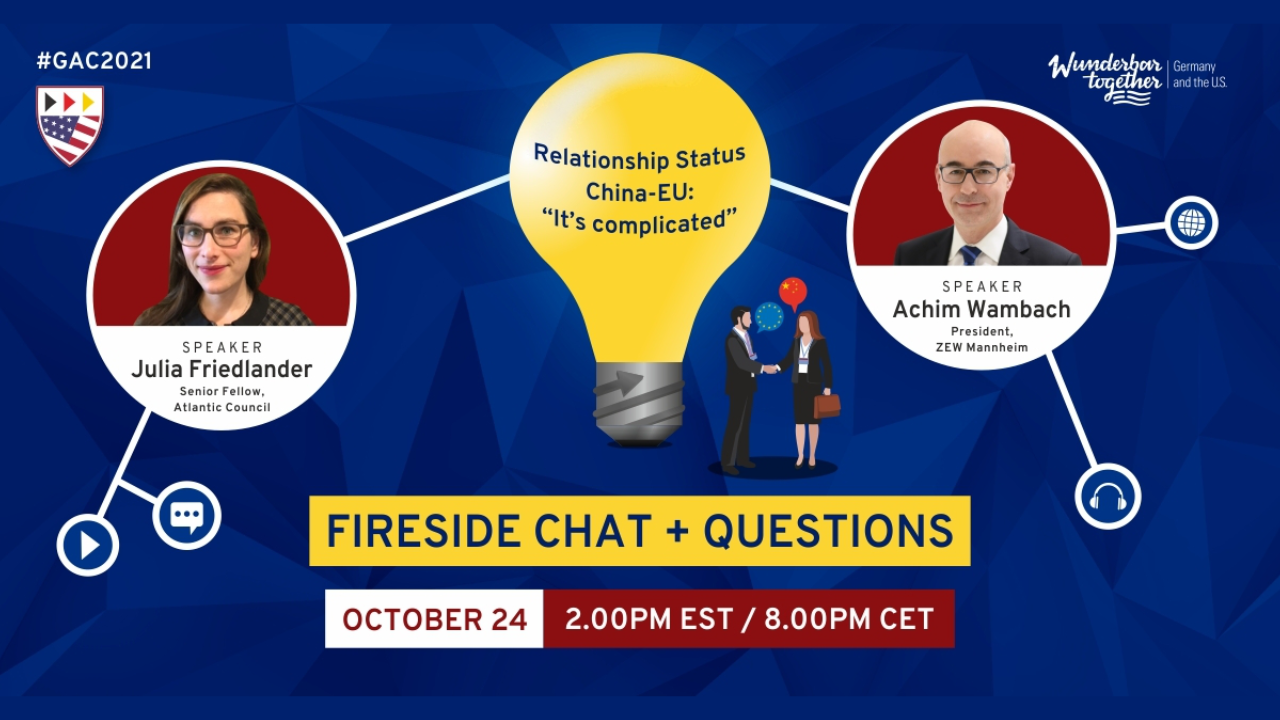 Amidst time of the global Covid-19 pandemic, pivotal threats through climate changes, and geopolitical dynamics rebalancing power politics, the EU strategy on China tops the agenda of EU politics. On the one hand, China is EU’s second-largest trading partner behind the United States and the EU is China’s largest trading partner. On the other hand, high-level EU officials recently referred to China as a “systemic rival” and called for more aggressive political and economic sanctions as tensions between both sides aroused, especially during the recent pandemic. Further, arising tensions between the vital players USA and China over the last years lead to a political love-hate triangle creating additional complexity for the EU on several fronts. Together with you, we want to uncover the structure of the “complicated” relationship between China and EU and explore how the result will affect the transatlantic relationship.

The event will begin with a small introductory statement by both speakers, Julia Friedlander (Senior Fellow, Atlantic Council) and Achim Wambach (President, ZEW Mannheim). This will pave the way to a constructive exchange of current challenges and developments affecting the EU’s economics and politics to China.

Similar to the very popular key note events that we have established during prior German American Conferences, we would like to gather questions from the audience in our chat function which will be addressed by our speakers Julia Friedlander and Achim Wambach. We hope to promote a discussion amongst students and professionals from the U.S., Germany and other countries about the national and transatlantic implications of the discussed topics underlying the China-EU relations.

- Julia Friedlander is the C. Boyden Gray senior fellow and deputy director of the Atlantic Council’s GeoEconomics Center. Ms. Friedlander served as senior policy advisor for Europe at the U.S. Department of the Treasury’s Office of Terrorism and Financial Intelligence from 2015-2017 and from 2019-20, and as a macroeconomist in the Department of International Affairs. From April 2017 to July 2019, Julia was detailed to the White House as the Director for the European Union, Southern Europe and Economic Affairs at the National Security Council, charged with coordinating U.S. interagency policy on transatlantic relations and the European Union. Before Treasury, she held multiple analytical positions within the Central Intelligence Agency. Julia holds a B.A. in European History from Princeton University and an M.A. from Johns Hopkins SAIS. She spent two years in Berlin on a fellowship from the German Academic Exchange Service working for the German Marshall Fund and DGAP.