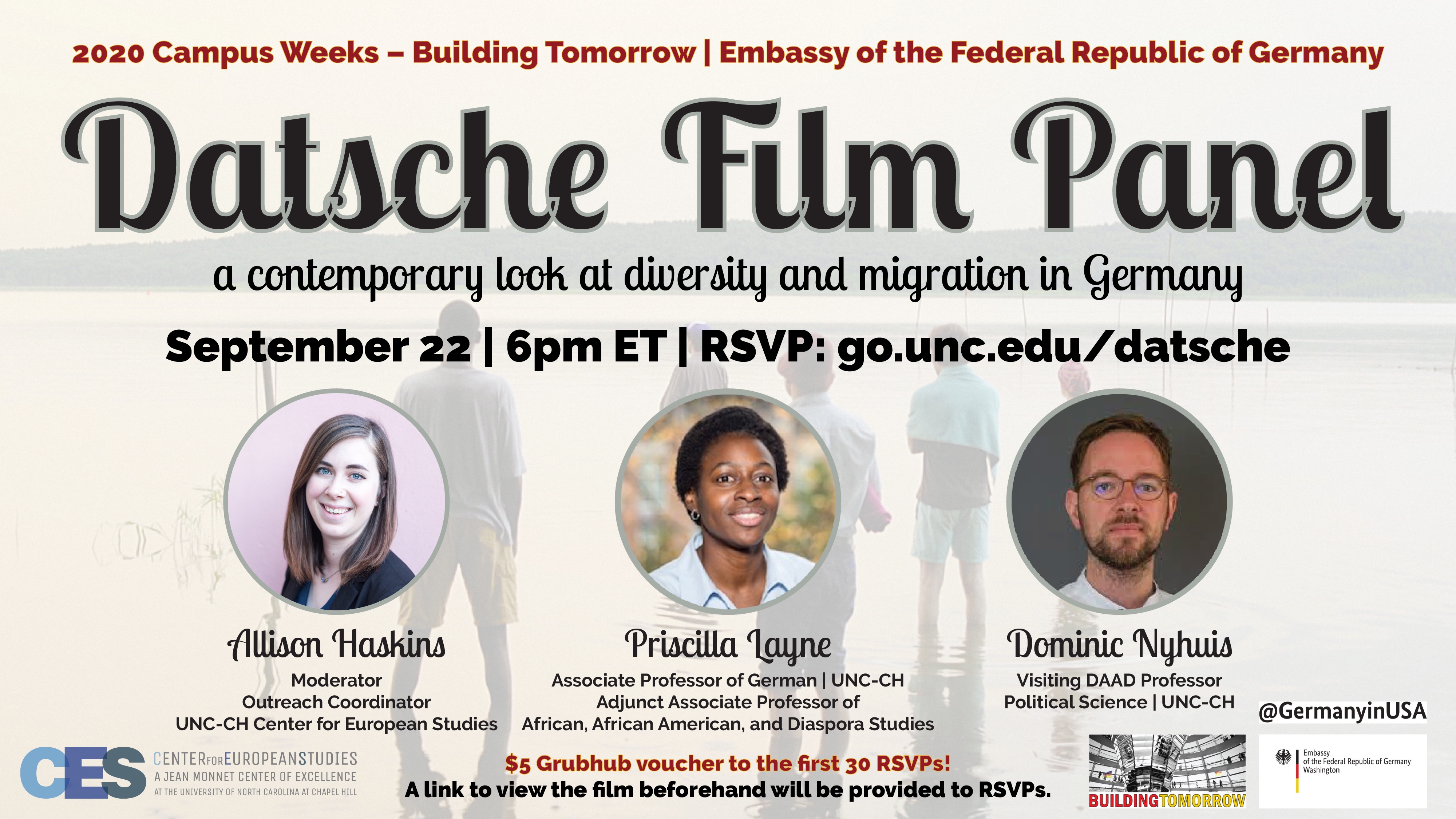 This event is part of the 2020 Campus Weeks — Building Tomorrow initiative sponsored by the Embassy of the Federal Republic of Germany. A virtual expert panel on the 2018 German film Datsche. Datsche provides a modern look at diversity and migration in Germany, as well as insight into cultural differences between the US and Germany.

For those who RSVP’ed, a link to the film was provided a week before the panel, so participants could view the film individually. A $5 GrubHub voucher was provided to the first 30 RSVPs.

Synopsis: When Val, an unemployed New York actor, arrives at a garden allotment outside of Berlin to spend the summer at his dead grandfather’s datsche – his summer house – he is faced with a wild garden, a large rule book, an interfering garden allotment president and Adam, a refugee who has been denied asylum in Germany and has been hiding in the datsche attic. And when Val invites some unusual strangers to stay at the datsche, the dream of a peaceful German life is threatened. This film provides a modern look at diversity and migration in Germany.

Priscilla Layne is Associate Professor of German in the Department of German and Slavic Languages and Literatures; and Adjunct Associate Professor of African, African American, and Diaspora Studies at the University of North Carolina at Chapel Hill. Professor Layne has guest lectured at Tübingen University and at the University of Bremen. Prof Layne focuses on sci-fi, cinema, and Black culture in Germany and Europe. Her first book, White Rebels in Black: German Appropriation of Black Popular Culture was published in 2018 by the University of Michigan Press. She is also the co-editor of the volume Rebellion and Revolution: Defiance in German Language, History and Art (2008). She is currently working on a monograph, Out of this World: Afro-German Afrofuturism. She held a Fellowship at the American Academy in Berlin in fall 2018. She has published articles on German film, literature, translation and music in German Studies Review, the Women in German Yearbook and Colloquia Germanica. Prof Layne is on the Board of the German Studies Association and Vice President of the American Association of Teachers of German.

Dominic Nyhuis is Visiting DAAD Professor of Political Science at the University of North Carolina at Chapel Hill. Professor Nyhuis received his PhD from the University of Mannheim for a project on the link between district preferences and candidate communication in German elections. His research on European and German politics focuses on party politics, legislatures, and subnational politics. With a background in quantitative methods, he is particularly interested in how the digital transformation changes research practices in the social sciences. To this end, he has worked on the automated collection of large-scale web data, as well as tools for the analysis of text and video data. Professor Nyhuis currently teaches undergraduate European Studies and Political Science majors as well as students in the TransAtlantic Masters Program.

the Embassy of the Federal Republic of Germany