Presented by Friends of Freiburg University 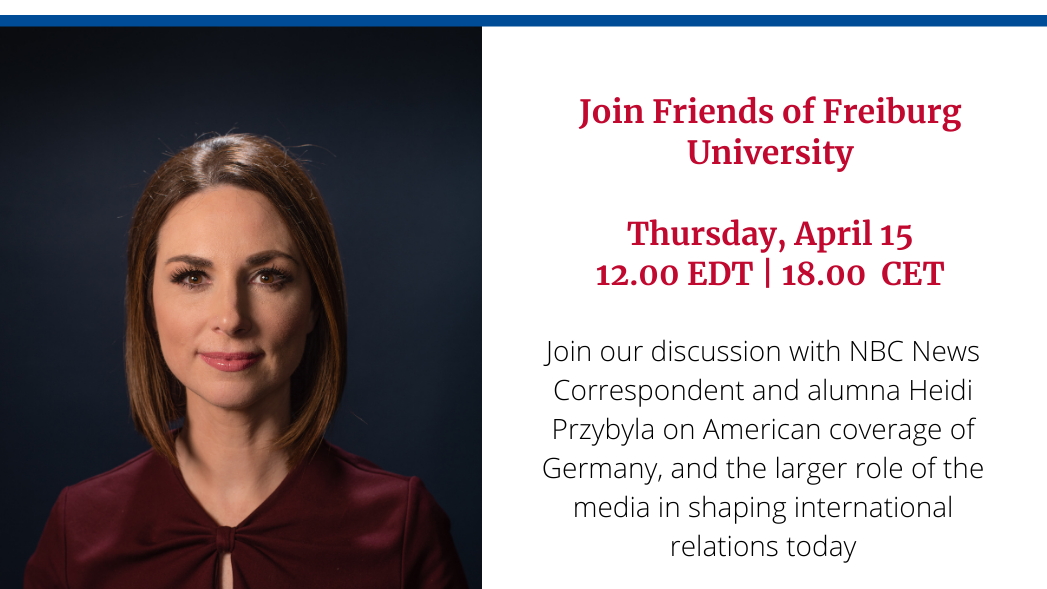 Friends of Freiburg is thrilled to welcome alumna Heidi Przybyla, NBC News Correspondent, for our next “Virtual Stammtisch, Expert Perspectives” event. This lively discussion will examine how Germany is covered in American media, and Heidi will also draw on her extensive experience as a political journalist to talk about the larger role of the media in shaping international relations today.

About the Speaker:
Heidi Przybyla is an NBC News correspondent based in Washington, D.C. covering the federal government’s ongoing response to Covid-19 and both the Trump and Biden administration’s vaccine rollout, distribution campaigns and economic response policy.

In December 2020, Przybyla broke the first story on the Trump administration’s lack of planning for vaccine distribution beyond first phase guidelines.

One day after her exclusive interview in April 2020 with a leading Mayo Clinic cardiologist on potential dangerous cardiac effects of a Hydroxychloroquine drug combination to treat coronavirus, the American Heart Association and American College of Cardiology issued a formal warning to detail critical cardiovascular concerns in using the drug.

Przybyla also covers all aspects of government, including both houses of Congress. Previously, she reported on the 2020 presidential election and was the first to report that then-candidate Joe Biden still supported the Hyde Amendment, setting him apart from his former 2020 Democratic competitors. Hours following Przybyla’s reporting, Biden held a press conference and reversed his decades-long position saying he no longer supported the measure.

In 2018, Przybyla was the first to obtain a memo to the FBI and text messages that then-Supreme Court nominee Brett Kavanaugh was communicating with former classmates to proactively refute sexual harassment claims. In addition, a press adviser who had been leading the Senate Judiciary Committee’s response to the allegation against Kavanaugh resigned after Przybyla broke the news that he was fired from a previous job in part because of harassment allegations against him.

Przybyla was also the first reporter to obtain internal notes and emails showing career staff at the Dept. of Health and Human Services objected to the Trump administration’s abrupt cancellation of a federal program to prevent teen pregnancy. Days later, HHS agreed to pull back — at least temporarily — its earlier decision to cancel the program outright.

In April 2018, she was the first network television reporter to interview retired Sen. Majority Leader Harry Reid after he left the Senate warning of Russian interference in the U.S. election.

Prior to joining NBC News, Przybyla was senior political reporter at USA TODAY, where she led coverage of Hillary Clinton’s campaign and the broader 2016 presidential field.

For more than a decade, Przybyla served as a political, White House and congressional reporter at Bloomberg based in Washington. Przybyla covered the end of President Bill Clinton’s time in office as well as President George W. Bush’s administration, including reporting from the White House during the terrorist attacks on Sept. 11, 2001. She anchored much of the wire’s politics and policy coverage in the House and Senate. Przybyla was a contributor to BusinessWeek magazine and co-hosted episodes of Bloomberg’s “With All Due Respect.”

While at Bloomberg, she was the first reporter, during a visit to his ranch, to question former President Bush about the now-defunct Enron energy company.

Przybyla has covered every presidential election, except one, since 2000 and also served as Bloomberg’s lead poll writer. She has reported from India, Pakistan, China, Japan, Ireland, Egypt, among other nations.

She began her journalism career at the Washington Business Journal, where she was a National Press Foundation Fellow, winning one of two national awards to attend an annual Wharton Business Seminar for Writers.

In 2019, she was among the group of NBC News “Road Warriors to receive the “First Amendment Award” from the Radio Televisions Digital News Association.

Przybyla has a bachelor’s degree in international affairs and German from Michigan State University. She studied abroad at the University of Freiburg from 1993-1994. Follow Przybyla on Twitter at @HeidiNBC.