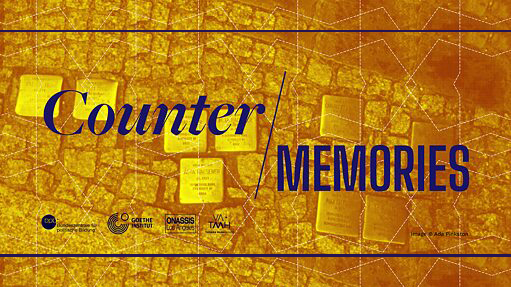 Counter-Memories is a cooperation between the Goethe-Instituts in North-America, the Onassis Foundation Los Angeles, and the Thomas Mann House in collaboration with the project “Shaping the Past.”

In the United States, Germany, and throughout the world, citizens are questioning conventional historical narratives and reflecting on the meanings and implications of public monuments. Recent protests and interventions around statues of Confederate generals and figures such as Columbus and Bismarck reflect a yearning to correct and critically re-examine dominant histories and their ongoing legacies in the present.

The conversation series Counter-Memories will investigate a number of international monuments and places of remembrance whose symbolic significance often reveals a great deal about our relationship to history. The Goethe-Instituts in North America, the Goethe Pop Up Kansas City, the Thomas Mann House, and Onassis LA will convene artists, activists, and intellectuals for illustrated virtual conversations around historical memory.

Episode 3 will be released on November 23, 2020 and will focus on the Levi Harrington Memorial Marker in Kansas City, Missouri.

Levi Harrington was a 23-year old Black man who became a victim of a racial terror lynching when he was brutally lynched by a white mob of at least 300 people in Kansas City, Missouri in 1882. Harrington's story is only one out of numerous racial terror lynchings that took place after Reconstruction across the US. In 2018, 136 years after Harrington’s brutal death, a memorial marker was installed by the Community Remembrance Project of Missouri to commemorate Harrington and to rectify a lack of recognition of lynching and racial conflict in Missouri. It was the first marker to publicly remember a victim of a lynching in Kansas City.

The memorial marker has already been vandalized twice since its installation 18 months ago. In June of this year, amidst Black Lives Matter protests spurred by George Floyd’s death, it was cut from its pole and thrown off a nearby cliff. The pole that once held the marker is now the only physical remainder of the monument — ​making this place of remembrance and the vandalism it suffered a special place of (non-)remembrance, or even a place where remembrance is confronted with denial. The Community Remembrance Project of Missouri refers to the vandalism in the following way: ”The attack on the marker represents a violent denial of truth and the very right of Black communities and other communities of color to proclaim it. It is a hate crime.”

This Counter-Memories episode centers around the story of the Levi Harrington Memorial Marker as an example of how a local initiative in Kansas City is attempting to remember the countless victims of lynchings and create historical memory. It is comprised of a conversation between Glenn North and Staci Pratt, the two founders of the Community Remembrance Project of Missouri and journalist Amira El Ahl. Their conversation will be enriched through spoken word performances and illustrated with videos, images, and archival material.