Science in a World of Politics: 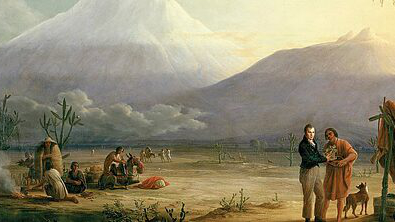 Science in a World of Politics: Alexander von Humboldt's Journey to the United States

Join us for a lecture about one of the key figures of the globalization of knowledge.

In 1804, famed German naturalist Alexander von Humboldt (1769-1859) arrived in the United States after a five-year exploration voyage through the Spanish colonies. Here he became acquainted with the most prominent scholarly and political circles in Philadelphia and Washington. He also met several times with President Jefferson in the new capital and provided the US government with geographical and statistical material that he had taken from the Spanish archives in Madrid and Mexico. After the Louisiana Purchase in 1803, and diplomatic disputes between the United States and Spain regarding the borders of the acquired territory, Jefferson had increased interest in acquiring Humboldt’s expertise. Humboldt did indeed generously pass information to the young nation, as part of the free circulation of knowledge he practiced, yet this also attracted criticism.

In her talk, historian and Humboldt scholar Dr. Sandra Rebok explores the questions of how useful these documents actually were for Jefferson’s vision for the West; why Humboldt felt entitled to freely dispose of this knowledge; and what this means for our modern understanding of science and its role in society.

Dr. Sandra Rebok is the author of several books on Humboldt as well as the editor of three of his works in Spanish. Her last book discusses his intellectual exchange with Thomas Jefferson (Jefferson and Humboldt: A Transatlantic Friendship of the Enlightenment, 2014) and her forthcoming monograph analyzes his position between the Spanish Empire and the expanding United States (Humboldt’s Empire of Knowledge: From the Royal Spanish Court to the White House, 2020). She is currently preparing a new book project that describes the networks of knowledge Humboldt established within the United States and his impact on the development of sciences in this country (Expanding the Frontiers of American Science: Humboldt's Networks of Knowledge).

Leading up to our lecture, we also invite you to join us for an online screening of the documentary Humboldt in Mexico: The Vision of the Explorer, which will be available to stream between November 6-8.